A week ago, a Muslim woman was seen taking selfies of herself while the dastardly, nationalist, Vlaams Belang group was holding an anti-Islamicization protest in the background. Naturally, MSM sites swooned with delight. Here was the BBC: 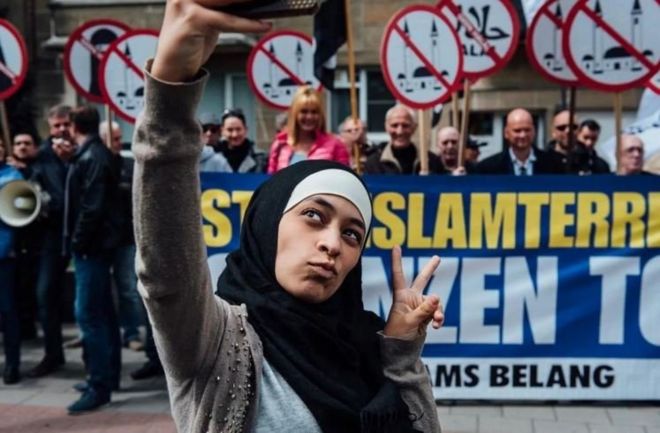 When hijab-wearing Zakia Belkhiri saw members of a far-right anti-Islam group protesting outside an Islamic lifestyle event she was attending in Belgium she responded like a true Millennial.

The 22-year-old took out her phone and snapped a series of selfies with members of Vlaams Belang – a far-right nationalist group who some have described as “openly anti-Muslim”. The photo above of Ms Belkhiri posing against the backdrop of the demonstrators – some of whom were clearly impressed by her cheek – has since been widely shared on social media…

Ms Belkhiri told BBC Trending that she took the photos “to show that things can be different. And that we can live together, not next to each other but with each other.”

A week later, however, we learn that the woman isn’t quite so tolerant after all. From Fox News:

A Muslim woman who was photographed taking selfies in front of a Belgian protest last week, earning her widespread praise for her cheerful stance against bigotry, reportedly praised Hitler and called for the killing of Jews in past Facebook posts.

Here is a similar, swooning BBC article from earlier this month, apparently printed solely as a platform to show this P.C. photo reinforcing The Narrative. (“Photo of woman defying neo-Nazi march in Sweden goes viral”): 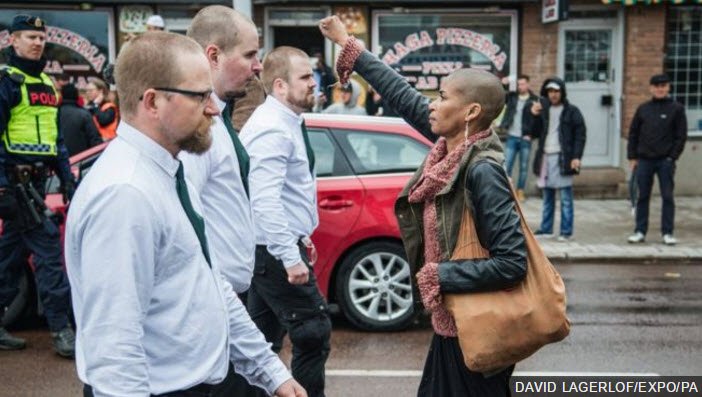 A photograph of a woman with her fist raised defying a uniformed march of neo-Nazis in Sweden has gone viral.

Activist Tess Asplund took part in a counter-demonstration during a Nordic Resistance Movement (NRM) rally in Borlange on Sunday.

She has been widely praised on social media, including by Harry Potter author J K Rowling, who has called her “magnificent”…

Ms Asplund said it would be “great” if the photo made people pay more attention to the fight against racism and xenophobia but that she did not want to be seen as a symbol.

On Twitter, many users called her “hero” and “amazing”. Others noted her “unbelievable bravery” and “courage”.

So, how long before we find out what wonderfully tolerant things are in the bowels of her FB posts?

This entry was posted in Islam, MSM, Race, White Identity. Bookmark the permalink.