Calexico: The Future of the U.S.

Mexicans have very different ideas of what ‘government’ is and does, and what ‘la policia’ is and does.

The appropriately named CA town of Calexico is 96.8% hispanic and borders Mexico.

The piece starts off like a Dashiell Hammett novel:

Sitting hard up against a towering rusted fence that separates the United States from Mexico, this city is for most a dreary gantlet of fast-food restaurants and gas stations on the way to one of Calexico’s two official border crossings.

Calexico wasn’t a place that Mike Bostic had ever visited. In fact, the former high-ranking Los Angeles police official thought it was in Mexico until he got a call from its new city manager in September.

The call led to a secret meeting in a San Diego hotel room. There, the city manager, Richard Warne, told Bostic that a group of veteran cops was running the department like a fiefdom, taking home big overtime checks while very little police work was getting done.

Calexico needed a new police chief, Warne said. And he wanted Bostic for the job…

One afternoon in October, while Bostic waited in his car outside, Warne summoned the city’s chief into his office and promptly fired him. He then fetched Bostic, walked him into the town’s one police station and introduced him to a stunned group of officers.

Warne and Bostic, it should be added, are white guys.

So, what is going on in Calexico?

It was, Bostic said, a department that essentially had ceased to function. Dispatch records showed each of the about two dozen officers on the force had responded, on average, to only five radio calls for help in a month. Many officers, Bostic said, were months behind on writing crime reports.

Even the fact that Calexico’s crime rate appeared to be half that of a nearby city was not cause for encouragement. To Bostic, it was proof many residents had simply given up looking to the police for help and reporting crimes — a sentiment he said he heard repeatedly at town hall-style meetings.

“The community has been afraid even to call for too long,” said Eddie Guzman, 61, a mortgage broker who has lived in Calexico for more than 50 years. “I’m hoping that things will change under him. We need someone from the outside to come in and clean this place up.”

IOW, the police were acting like… well… like la policia in Mexico. Translation: massive abuse (if not outright corruption), of which I’m sure the LAT is only hitting the tip of the iceberg of.

Guzman, like several other residents and city officials, chalked up the trouble in the Police Department–as well as the city government–to “the compadre system,” a set of unwritten but deeply ingrained rules that they say form the underpinnings for civic life in Calexico. Under the compadre system, they say, favors are traded like currency and personal relationships often trump the rule of law.

“The city has a long history of favoritism, cronyism and corruption among city officials,” Warne charged, noting he is the 26th city manager to be hired in the last 35 years. “The hiring of friends, relatives and mistresses has been a common practice–people who were clearly unqualified for their jobs. Goods and services are purchased based on personal connections without any consideration of quality…

The problems, Bostic said, stemmed from half a dozen or so officers, who also held sway in the police officers union. Bostic said they effectively ran the department, threatening other officers with misconduct investigations if they got out of line and running the department’s $450,000 annual budget for overtime to nearly $1.5 million.

Now, about that tip of the iceberg:

Soon after he took over in Calexico, Bostic said he contacted the FBI, relaying concerns he had about some of his officers. Then, on a morning in late October, dozens of agents descended on the police station, seizing computer hard drives and documents.

FBI officials acknowledged the ongoing investigation but declined to comment on its scope or focus. Bostic, for his part, has refused to elaborate on the probe…

There’s no mention of ethnic breakdown of the police force, but regarding 3 officers Bostic fired:

Three police officers whom Bostic fired, leaders in the union representing the city’s cops, object to his portrayal of a badly broken department. Instead, they argue, Bostic and Warne are part of a campaign by some City Council members to dismantle the union, which is a force in local politics

The LAT piece has this accompanying photo, which sheds light on the ethnicity thing. 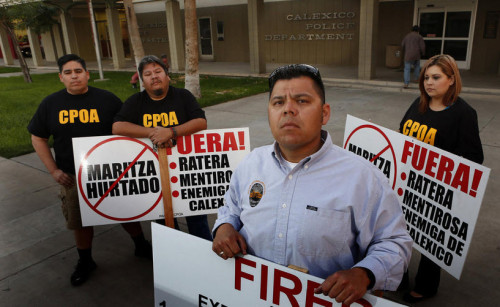 Notice the language used in the signs.

But, wait, isn’t the idea of Mexican police being corrupt a stereotype?