I had a couple of ‘Dark ‘N’ Stormy’s recently in NYC, home of the $14 cocktail. It was layered beautifully in a tall glass, went down incredibly easy, and was dangerous in the aforementioned detail. 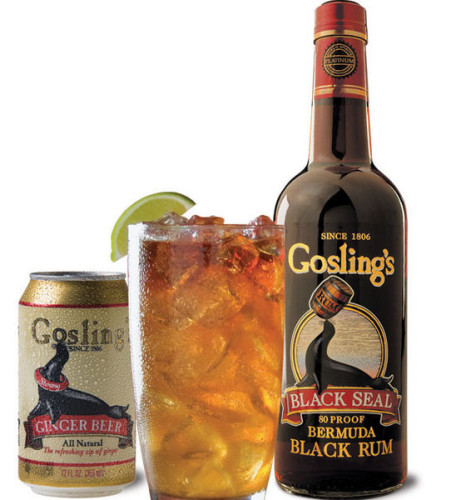 Ginger beer is not ginger ale, nor is it a beer per se, but (like root beer) is a non-alcoholic, intensely gingered soda, made for mixing. You can find it in most liquor stores and — in various supermarkets — you can find Goya’s version, albeit not among the sodas on the soda aisle but rather in the ‘Goya section’.

For those who are trying to watch their sugar intake, be aware that ginger beers typically have an astronomical 50+ grams of sugar per serving, unless you get your hands on Gosling’s diet ginger beer, which your local liquor store can special order for you.

From what I can gather, a true Dark ‘N’ Stormy requires Gosling’s Black Seal Rum (although this may simply be due to the fact that Gosling has a trademark on the cocktail’s name.)

There are variations on the recipe, but I’ve found the best permutation to be as follows:

This entry was posted in Libations. Bookmark the permalink.