From the Daily Mail: 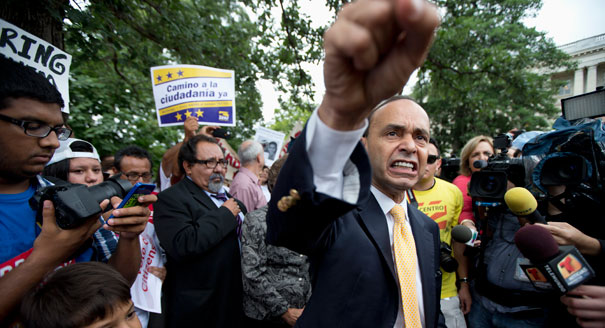 A Democratic congressman wants millions of people who hold U.S. green cards to become American citizens in order to send Donald Trump and other Republicans a message that they’re ‘mean and frankly, let’s be honest, racist.’

Louis Gutierrez, who is the senior House Democrat from Illinois and a Puerto Rican immigrant, spoke on the House floor just after 10:00 Wednesday morning, delivering a message especially to more than 5 million Hispanic U.S. residents who are eligible for citizenship today.

‘Every time you see Trump’s face on your TV, vow to learn a little more English or a few more history facts so you can take the [citizenship] test,’ he said.

Taxpayer subsidies — which I’m guessing the vast majority of illegals from Mexico would qualify for — are highlighted by Angry Louis:

Gutierrez said Wednesday morning that his plan to create millions of naturalized Hispanic-Americans is ripe because of how cheap the process has become.

‘Let me fill you in on a little secret,’ he said. ‘With fee waivers for up to 20 per cent of those applying, it is absolutely free.’

‘Becoming a citizen for free so you can make it clear that you are offended by Donald Trump – it is poetic and patriotic.’