The Ballad of Atticus Finch

Atticus Finch, particularly as played by Gregory Peck, was and is a paragon of virtue, a liberal’s wet dream of a southern gentleman who is… just like them.

The publication of Harper Lee’s Go Set a Watchman has, um, problematized this a bit.

To give you an idea of what a tizzy libs are in over this:

… and, among my favorites:

What pray tell, is causing the collective P.C. head explosion? 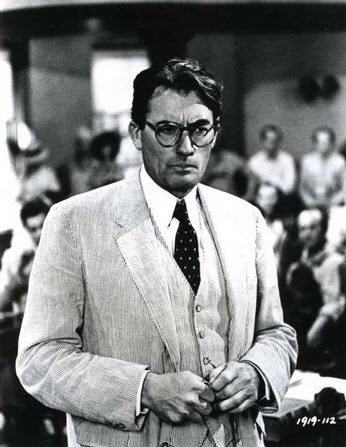 Atticus Finch, it seems, isn’t a Northeast liberal. He actually appears to have the collective interest of whites as a moral concern of his, among many other moral concerns — such as the importance of every individual, regardless of race, getting a fair trial.

And that is equivalent to being racist.

The NYT is wringing their hands about it, and in the WSJ, Sam Sacks similarly wrings his hands about it (“In Harper Lee’s ‘Go Set a Watchman’ Atticus Finch Defends Jim Crow“):

Although [“Go Set a Watchman”] is set in the mid-1950s, around 20 years after “To Kill a Mockingbird,” it is not a sequel. Ms. Lee, who is now 89, wrote it first, submitted it to a publisher in 1957 and, on an editor’s advice, refashioned it into the book that’s now assigned in grade schools all over the country. Properly speaking, “Go Set a Watchman” is a practice run for “To Kill a Mockingbird,” and it existed before anybody could have known that small-town Alabama lawyer Atticus Finch would become a symbol of the nation’s moral conscience.

… [“Go Set a Watchman”] takes place shortly after the 1954 Brown v. Board of Education decision — “the Supreme Court’s bid for immortality,” as Atticus sarcastically calls it — and, like most of the South, the town is in upheaval over the prospect of enforced integration. Jean Louise thinks little of it until she sees Henry and her father attending a meeting of the Maycomb County Citizens’ Council, where local whites convene to spew racist bile and organize resistance to the federal government.

Jean Louise is appalled by the possibility that the men she most admires could belong to such a group, but when she confronts Atticus, he defends the council as a necessary reaction to the overreach of the government and the meddling of the NAACP. Blacks have “made terrific progress in adapting themselves to white ways,” he grants, but they’re not at all ready for full civil rights: “Do you want your children going to a school that’s been dragged down to accommodate Negro children?”

Yes, that is correct: Atticus Finch, standard-bearer of justice and integrity and one of the few unambiguously heroic figures in American literature, was originally conceived as a segregationist.

I wonder where Atticus Finch would come down on the Confederate Flag now being made synonymous with the swastika?