DREAMers: GOP is “Dead” to Us

With the political momentum (and it’s public expression) clearly on their side, why wouldn’t they? 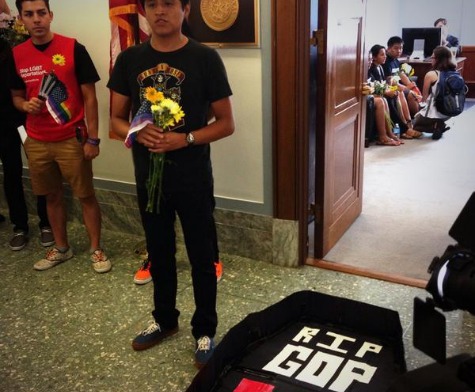 On Monday, DREAMers stormed the halls of Congress to stage a “GOP funeral” in front of the offices of Republican senators, some of whom have expressed concerns that President Barack Obama’s unilateral grants of temporary amnesty have caused the current border crisis.

Pro-amnesty activists from United We Dream dressed in black and marched around with a mock casket that had these words emblazoned on it: “RIP GOP.” They held flowers and started chanting and singing, “We shall overcome.”

Sen. Ted Cruz (R-TX) has said Obama should not award temporary amnesty to DREAMers in the future because the Deferred Action for Childhood Arrivals (DACA) program only encourages smugglers and cartels to exploit more illegal immigrant children. And the DREAMers targeted his office, along with those of other senators, while yelling, “Enough is enough!”

“We are here to say the Republican Party is dead to us,” a spokesperson for United We Dream declared in the halls of Congress. “We can’t let DACA disappear for our community.”

Another activist said the GOP is “dead” and “irrelevant” and “no longer speak[s] for the American people and the nation,” even though a majority of Americans in two national polls said they want illegal immigrant children sent back as quickly as possible. A Gallup poll also found that illegal immigration is now the “top problem” facing Americans.