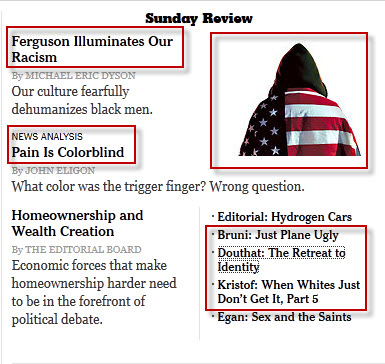 Sunday reading in the NYT is a Ferguson Bonanza! It’s the 1960s all over again!

And the photo of a red white n’ blue hoodie (get it?) is actually a hyperlink to an op-ed titled “Where Do We Go After Ferguson?”

In his column, Ross Douthat still hopes racial identity-politics can be overcome (LOL), hoping to transcend the earlier, ‘truthier’ possibilities he notes earlier in his column. After situating the obvious political polarity emerging between the Obama Coalition (Democratic Party) and whites (GOP), Douthat writes:

The key point here, though, is that whichever coalition is ascendant in this scenario, a politics divided primarily by identity is likely to be more poisonous than one in which both parties are offering more-color-blind appeals.

Unfortunately, identity is also the most primal, reliable form of political division. And Ferguson has provided a case study in exactly how powerfully it works.

Hmm… the so-called ‘color blind’ appeals of two (two? Really, Ross?) ginormous, platform-politics, dinosaur parties… or primal impulses toward (racial) group identity that have been part of humankind since its inception…

That’s a tough one…

This entry was posted in MSM, National, Race. Bookmark the permalink.