There is also fascinating historical detail about the production of gin: apparently today’s Bombay Sapphire uses a still apparatus made in 1834…

When he was The Daily Telegraph’s jazz critic, Philip Larkin declared that “listening to new jazz records for an hour with a pint of gin and tonic is the best remedy for a day’s work I know.”

From this article was a link to a wonderful 2012 piece with excerpts from The Richard Burton Diaries. I’ve always loved Burton’s screen presence. He seemed like a helluva guy, from modest Welsh roots, and, it turns out, a helluva writer. Some excerpts:

23 July 1969 The K[ennedy] family are of course notorious satyrs. I was amazed when Bobby K took Margot Fonteyn off into a back bedroom in Pierre Salinger’s house and my asking Salinger, when they came back, “where the hell have they been?” and Salinger’s fat-faced reply which was a finger over the lips. When Jack Kennedy was running for president and stayed with Sinatra at Palm Springs the place was like a whore-house with Kennedy as chief customer. Christ the chances those fellers took. 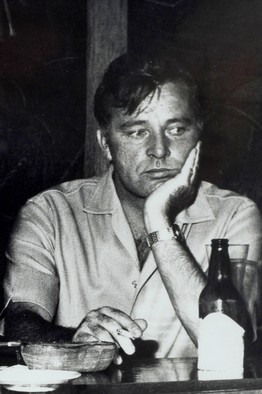 4 December 1971 [At dinner] My attention was riveted from the first by a man sitting opposite me. He looked like a cadaver. He was eyebrow-less and eyelash-less and atrociously wigged or dyed with snow-white hair at the front of his head and brownish at the back. His face was hideously pasted with make-up and had odd lumps on it, a face made of funny putty by an inept child. [RB’s introduction to Andy Warhol]

18 October 1966, Italy. We drank sambuca and said nasty things to each other. We drove back in silence to Positano. We had soup in the room and slept. Christ how I hate such days. Beware of sambuca. It brings out evil things. It is a turner over of stones in damp caves.

16 October 1966, Positano. I took E’en So [dog] for a walk up the hill from the hotel but, since I literally stopped traffic, I went back after a couple of hundred yards. Why do they do it? I never gaped at anybody in my life and much as I admire certain famed people, Churchill, and various writers – Dylan Thomas, T.S Eliot, Spender, Greene, MacNeice etc – I have never asked them for an autograph. I actually feel as embarrassed seeing a public figure as being one.

29 October 1968 I have been offered a million dollars for one month of this diary. Somebody is mad. And I is not it.

This entry was posted in Film, Hollywood, Libations. Bookmark the permalink.