From The Organizer’s speech to the U.N. today:

I realize that America’s critics will be quick to point out that at times we too have failed to live up to our ideals; that America has plenty of problems within our own borders. This is true. In a summer marked by instability in the Middle 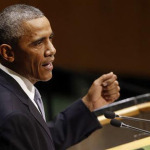 East and Eastern Europe, I know the world also took notice of the small American city of Ferguson, Missouri – where a young man was killed, and a community was divided. So yes, we have our own racial and ethnic tensions. And like every country, we continually wrestle with how to reconcile the vast changes wrought by globalization and greater diversity with the traditions that we hold dear.

His abstracting of the Ferguson incident to be “about America”, given his saying this at the venue that is the United Nations.

His assumption that the rest of the world (i.e., those outside the U.S. cable news audience) even heard of the case.

His assumption that the rest of the world (while said world is on fire) give a shit about an isolated police incident involving the Gentle Giant.

His endless overall criticism to the world of the country he leads (something you never see other foreign leaders do.)

The line between reality and an Onion parody are increasingly blurring.

This entry was posted in Black, Left, Race. Bookmark the permalink.