H.P. Lovecraft on the ‘Melting Pot’ 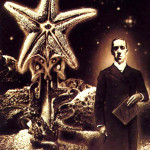 “Americanism” is expanded Anglo-Saxonism. It is the spirit of England, transplanted to a soil of vast extent and diversity, and nourished for a time under pioneer conditions calculated to increase its democratic aspects without impairing its fundamental virtues. It is the spirit of truth, honour, justice, morality, moderation, individualism, conservative liberty, magnanimity, toleration, enterprise, industriousness, and progress—which is England—plus the element of equality and opportunity caused by pioneer settlement. It is the expression of the world’s highest race under the most favourable social, political, and geographical conditions. Those who endeavour to belittle the importance of our British ancestry, are invited to consider the other nations of this continent. All these are equally “American” in every particular, differing only in race-stock and heritage; yet of them all, none save British Canada will even bear comparison with us. We are great because we are a part of the great Anglo-Saxon cultural sphere; a section detached only after a century and a half of heavy colonisation and English rule, which gave to our land the ineradicable stamp of British civilisation.

Most dangerous and fallacious of the several misconceptions of Americanism is that of the so-called “melting-pot” of races and traditions. It is true that this country has received a vast influx of non-English immigrants who come hither to enjoy without hardship the liberties which our British ancestors carved out in toil and bloodshed. It is also true that such of them as belong to the Teutonic and Celtic races are capable of assimilation to our English type and of becoming valuable acquisitions to the population. But, from this it does not follow that a mixture of really alien blood or ideas has accomplished or can accomplish anything but harm. Observation of Europe shows us the relative status and capability of the several races, and we see that the melting together of English gold and alien brass is not very likely to produce any alloy superior or even equal to the original gold. Immigration cannot, perhaps, be cut off altogether, but it should be understood that aliens who choose America as their residence must accept the prevailing language and culture as their own; and neither try to modify our institutions, nor to keep alive their own in our midst. We must not, as the greatest man of our age declared, suffer this nation to become a “polyglot boarding house.”