How Many More Must Die?

SAINT-ETIENNE-DU-ROUVRAY, France — Two attackers backing the Islamic State stormed a village church during Mass in northern France on Tuesday, taking hostages and slitting the throat of a 86-year-old priest before police commandos shot and killed the assailants, authorities said…

At least one of the attackers appeared to be on a watch list, including being forced to wear an electronic bracelet to allow security officials to track his movements, said a police official cited by the Associated Press.

The measure was taken after the man tried to reached Syria, but was turned back at some point during the trip, the official said.

An official at the Archdiocese of Rouen identified the slain priest as Jacques Hamel.

At the Vatican, spokesman Rev. Federico Lombardi denounced the “barbarous killing” of the church attack.

According to other news sources, Father Hamel was beheaded, which fits the preferred Muslim method.

The Daily Mail reports that a nun was slashed as well, and is fighting for her life. 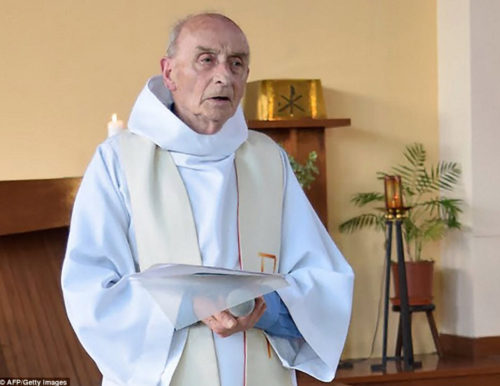 One of the men who stormed into the church in Saint-Etienne-du-Rouvray near Rouen during mass was a local man, who was being monitored by electronic tag after being jailed for trying to join fanatics in Syria.

The 84-year-old priest, named as Jacques Hamel, had his throats cut while a nun is critically injured in hospital following the raid which saw five people held hostage by ISIS assailants shouting Allahu Akbar.

This afternoon it emerged that the murdered clergyman was deputising while the parish priest was on holiday. French authorities say they have arrested a third man in connection with the attack.

Two identities of the attackers are already known to the authorities. One, who lived close to the church, is said to have left for Syria in 2015 to try and join ISIS, but he was arrested in Turkey.

He was jailed for terrorist offences following a short trial in France, before being released on March 2 this year. Bail conditions included returning to live with his parents, wearing an electronic tag, and reporting to his local police station.  Neither of the Saint-Etienne-du-Rouvray attackers have yet been named.

The ISIS terrorists who carried out the France church attack forced a parish priest to kneel before filming themselves slitting his throat, it has emerged.

Father Jacques Hamel, 84, was made to get to knees before he was brutally slayed at the church in Normandy this morning, says a nun who escaped the attack.

His murderers captured the sickening assault on video, according to Sister Danielle, who was one of several worshippers taken hostage during the incident.

“They forced him to kneel and he tried to defend himself and that is how the drama started,” the devastated nun told RMC radio this afternoon.

Speaking to BFM TV, she added that the terrorists ‘recorded themselves’ carrying out the killing and did ‘a sort of sermon around the altar in Arabic’.

When will the indigenous people of France say “Enough”?

This entry was posted in Europe, Islam. Bookmark the permalink.