On April 16, 2015, the information office for the Islamic State (ISIS) in Ninawa Province, Iraq, published a series of photos titled “Levelling Graves and Erasing Polytheist Symbols.” The photos, which were posted on the Shomoukh Al-Islam jihadi forum, among other places, show ISIS members shattering gravestones with sledgehammers and defacing crosses carved into them. The photos are prefaced by the religious justification for ISIS’s actions – a hadith determining that any grave higher than ground level must be shattered and any images on it must be erased: “Ali bin Abi Taleb said to Al-Hayyaj Al-Asadi: ‘I am dispatching you with what the Prophet dispatched me: That you not leave an elevated grave without levelling it, nor an image without erasing it.'”

Try to fathom, if only for a brief moment, what the reaction would be if Christians defaced Muslim graves. The MSM would play it endlessly. How, I wonder, would Muslims around the world react?

But, according to The Organizer, Christians mustn’t get on their “high horse”. 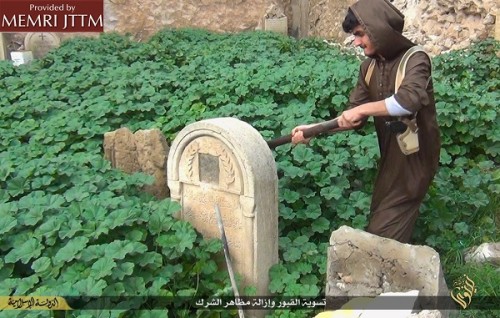 This entry was posted in Christianity, Islam. Bookmark the permalink.