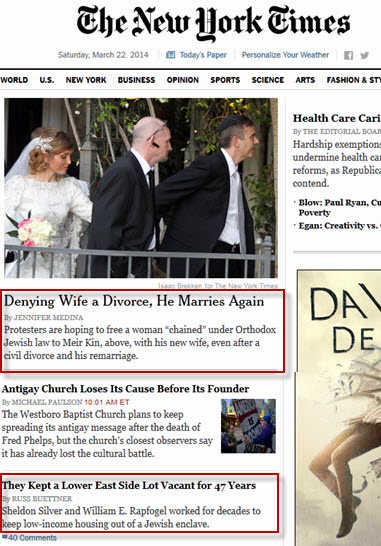 The “They Kept a Lower East Side Lot Vacant for 47 Years” article is as close as the NYT will ever get to showcasing the realities of jewish ethnocentrism:

Nearly four decades ago, a new assemblyman named Sheldon Silver and his young protégé escorted Edward I. Koch, then a mayoral candidate, through the Orthodox Jewish enclave on Manhattan’s Lower East Side where the two had both grown up.

It was the first day of Rosh Hashana, 1977, and Mr. Koch and his opponent, Mario M. Cuomo, had agreed not to campaign, even as they were locked in a frantic runoff for the Democratic nomination. 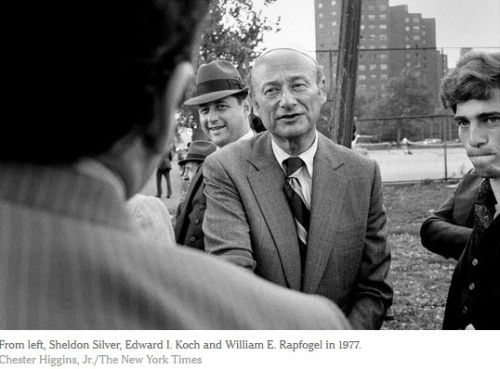 But the air of religious observance provided cover for Mr. Koch to walk along Grand Street with his two new friends, shaking the hands of influential rabbis and throwing bread into the East River, part of the ritual casting off of sins.

Six days later, Mr. Koch carried the Jewish vote and won the primary. His team long remained grateful for the guided tour by Mr. Silver and the protégé, William E. Rapfogel, then a recent college graduate who ran his own Jewish newspaper.

“They helped us big time in the runoff,” recalled John LoCicero, Mr. Koch’s chief political adviser. “It revved up the Jewish vote for Koch against Cuomo.”

I’m sure the ‘Jewish vote’ needed lots of revving and prodding, to vote for the Jewish candidate over the Italian one.

But let’s get to the heart of the matter:

The long-ago walk was the first public display of an alliance that became central to the lives and careers of both Mr. Rapfogel and Mr. Silver. They worked together across the decades while climbing parallel ladders: Mr. Silver to Assembly speaker and Mr. Rapfogel to leadership of the Metropolitan Council on Jewish Poverty, a large, publicly financed charity.

But their long affiliation came to an abrupt end last year when Mr. Rapfogel, 59, was arrested and charged in a scheme that had allegedly looted more than $7 million in kickbacks from Met Council’s insurance broker over the years. He is due back in court in April.

The arrest cast new light on a relationship about which little was known beyond the obvious: Mr. Silver has funneled millions of public dollars to the organization that Mr. Rapfogel led, and he employs Mr. Rapfogel’s wife, Judy, as his chief of staff.

A primary focus of their alliance had been a struggle to preserve the Jewish identity of the neighborhood they delivered for Mr. Koch all those years ago….

But an extensive review of the archives of four mayors and more than two dozen interviews show Mr. Silver and Mr. Rapfogel diligently working behind the scenes to promote specific plans and favored developers. Mr. Rapfogel made clear that the goal was to maintain the area’s Jewish identity, seemingly at the expense of other communities.

Mr. Silver and Mr. Rapfogel steadfastly opposed any mention of affordable housing, which would have altered the demographics of the neighborhood and put Mr. Silver’s political base in question. And Mr. Silver appears to have occasionally misrepresented the desires of his Chinese and Hispanic constituents in conversations with city officials to quash housing plans for the site…

Mr. Silver and Mr. Rapfogel were born in the neighborhood to Jewish parents. Mr. Silver, 70, grew up in a tenement on Henry Street. His father owned a neighborhood hardware business. Mr. Rapfogel’s father was a clerk for city government.

When they were boys, the blocks along Grand Street teemed with Jewish peddlers and dozens of small synagogues. Unions were building 12 apartment buildings in the neighborhood to house 4,500 families, mostly garment workers. Known as Cooperative Village, the apartments would anchor a new Jewish middle class.

Cooperative Village was surrounded by more than 14,000 units of public housing to the north, east and south. Those buildings were full of less prosperous African-Americans and more recent Hispanic arrivals. Chinatown, to the south and west, was expanding, as Jewish numbers declined.

From the perspective of Grand Street’s Jewish leaders, any development with affordable housing that replaced the cleared tenements would tilt the balance of the entire neighborhood.

Mr. Silver and Mr. Rapfogel fought that possibility, chiefly through a community group called United Jewish Council of the East Side. Mr. Rapfogel’s father, Hyman, was a co-founder and Judy Rapfogel was on its board of directors in the 1970s. Mr. Silver was the group’s lawyer and headed one of its housing corporations.

In the early 1970s, the city built a 360-unit housing project on a corner of the site. But that project wound up the subject of a court dispute when Jews were given many of the apartments. And the fate of rest of the site was still deadlocked…

Soon after, Mr. Rapfogel took a post in Mr. Goldin’s office as liaison to the Jewish community. He also became head of United Jewish Council’s development arm, South Manhattan Development Corporation, and soon after wrote an article in the group’s newspaper saying his mission was to “retain the distinctly Jewish religious and cultural identity of our community.”