Why, an article on the death of David Greenglass, of course. 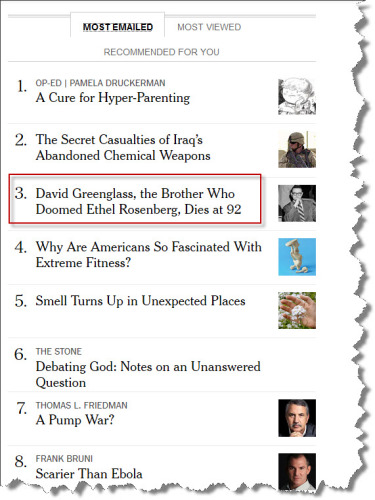 Greenglass, you may not know, provided testimony against his sister and brother-in-law, Julius and Ethel Rosenberg, who the U.S. executed in 1953 for espionage. (The Rosenbergs were that most rare of species: NYC Jews who were active communist sympathizers.)

Greenglass was himself a Young Communist League member, active communist sympathizer in his adulthood, and later a convicted Soviet spy involved in conveying top-secret Manhattan Project information to the Soviets in conjunction with the Rosenbergs’ schenanigans.

So, while flyover America doesn’t really care about Greenglass or his death, in the NYC Jewish social milieu, it is front and center. From another article on Greenglass’s death:

To some, Greenglass came to be seen as a symbol of betrayal. In the 1989 Woody Allen movie “Crimes and Misdemeanors,” Allen’s character says of his smug and annoying brother-in-law: “I love him like a brother — David Greenglass.”

This entry was posted in Jewish, National, NYT. Bookmark the permalink.