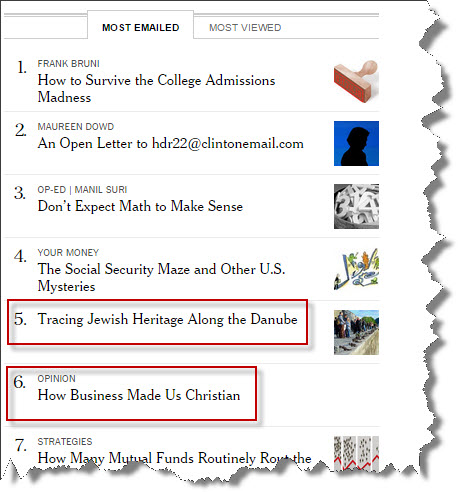 The “Tracing Jewish Heritage Along the Danube” needs no comment.

The “How Business Made Us Christian” op-ed does. It’s subtitle is “A Christian Nation? Since When?”… and it’s that sorta subtitle – one that instantly poo-poos the idea the U.S. was founded as an organically-comprised body of Christians — that is click-bait for the classic NYT reader.

Just a few weeks ago, Public Policy Polling reported that 57 percent of Republicans favored officially making the United States a Christian nation. But in 2007, a survey by the First Amendment Center showed that 55 percent of Americans believed it already was one.

The confusion is understandable. For all our talk about separation of church and state, religious language has been written into our political culture in countless ways. It is inscribed in our pledge of patriotism, marked on our money, carved into the walls of our courts and our Capitol. Perhaps because it is everywhere, we assume it has been from the beginning.

But the founding fathers didn’t create the ceremonies and slogans that come to mind when we consider whether this is a Christian nation. Our grandfathers did…

Yes, such confusion is understandable. What a crazy belief!

Sure, the original formation of the Massachusetts colony by English Puritans, Virginia by Anglicans, and Pennsylvania by Quakers, etc, was hugely influenced by variants of Protestantism (a particular subset of Christianity.)

But, what have you done for me lately, Christianity?

Accordingly, throughout the 1930s and ’40s, corporate leaders marketed a new ideology that combined elements of Christianity with an anti-federal libertarianism. Powerful business lobbies like the United States Chamber of Commerce and the National Association of Manufacturers led the way, promoting this ideology’s appeal in conferences and P.R. campaigns. Generous funding came from prominent businessmen, from household names like Harvey Firestone, Conrad Hilton, E. F. Hutton, Fred Maytag and Henry R. Luce to lesser-known leaders at U.S. Steel, General Motors and DuPont.

In a shrewd decision, these executives made clergymen their spokesmen. As Sun Oil’s J. Howard Pew noted, polls proved that ministers could mold public opinion more than any other profession. And so these businessmen worked to recruit clergy through private meetings and public appeals. Many answered the call, but three deserve special attention…

Read the piece for the exciting blow-by-blow action the trio embarked upon!

This entry was posted in Christianity, Cultural Marxism, National, NYT. Bookmark the permalink.