Karen Black has passed at the age of 74. While I never found her to be an actress of much range, for a good stretch she was a go-to actress for many movies in the 70s:

Karen Black, the Oscar-nominated star of groundbreaking films of the ’60s and ’70s like “Easy Rider,” “Five Easy Pieces” and “Nashville,” died on Thursday at the age of 74. Her husband, Stephen Eckleberry, confirmed on Facebook that she succumbed to cancer after a two-year battle.

Black trained at the Actor’s Studio in New York under the legendary acting teacher Lee Strassberg before making her film debut in 1966 with Francis Ford Coppola’s early film “You’re a Big Boy Now.” She shot to stardom three years later in the counterculture classic “Easy Rider” alongside Peter Fonda and Dennis Hopper as one of the women who join the bikers on a drug trip in a New Orleans cemetery 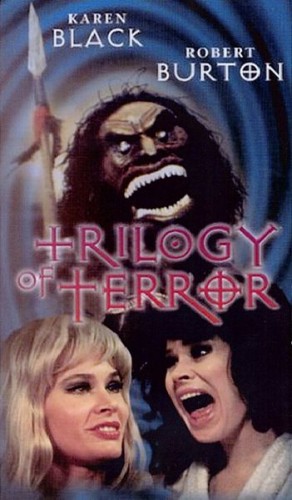 (“Mickey” singer Toni Basil was the other).

Black earned an Academy Award nomination for Best Supporting Actress in “Five Easy Pieces” as the country-singing waitress in an unhealthy relationship with Jack Nicholson’s disaffected classical pianist. This led to roles in many high-profile films of the 1970s, including “The Great Gatsby” with Robert Redford, Robert Altman’s “Nashville,” and “Family Plot,” Alfred Hitchcock’s final film. She also hosted “Saturday Night Live” in its second season (she returned to the show again in 1981). Her most indelible work of the decade, though, might well be the TV movie “Trilogy of Terror,” where she played the main character in three short horror films — including the famous solo battle with the Zuni fetish doll.

I was about 7 years old when I saw the famous ‘Zuni Doll’ episode (i.e., the ‘Amelia’ episode) of Trilogy of Terror (1975) and, man, it scared me shitless. In terms of my own lifetime of cinematic exposure, this 30 minute vignette is iconic. (I’ve got a full size Zuni doll replica at my house.)