The British soldier brutally murdered on a London Street was 25 year old Lee Rigby, who was married and had a 2-year old son.

Known as ‘Riggers’, he joined the Army in 2006 and, after completing his infantry training, was selected for the corps of drums and posted to the 2nd Battalion The Royal Regiment of Fusiliers, which is currently based on the 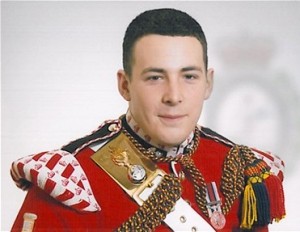 In 2009, he deployed to Helmand province where he was a machinegunner with the battalion’s fire support group in Patrol Base Woqab in Sangin, an insurgent hotspot.

His unit arrived in the warzone at the height of the Taliban insurgency and ran a deadly daily gauntlet of firefights and improvised explosive devices.

That year cost 108 British lives – almost a quarter of the 444 UK troops killed in the conflict. Drummer Rigby’s unit lost six men, including one of his close friends in a bomb blast that killed three soldiers.

While he survived dangerous tours in Afghanistan, he couldn’t survive the Islamic threat in his own home country.

How many more martyrs will it take before we wake up?

This entry was posted in Europe, Immigration, Islam, War on Terror. Bookmark the permalink.