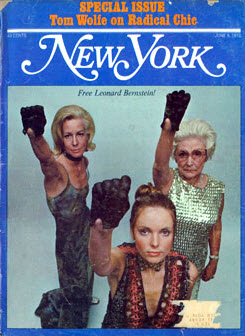 In 1970, before the term ‘limousine liberal’ was coined, the great Tom Wolfe coined the phrase ‘radical chic’, which was the title of his famous long-form NY Magazine piece (“Radical Chic: That Party at Lenny’s”). It’s a seminal piece of writing (to understand the psychology of the elite Leftists), describing in detail the nauseous degree of virtue signaling that takes place at Leonard Bernstein’s swanky and luxurious NYC apartment. It’s a recounting of a fundraising party for the radical Black Panthers, attended by other famous ‘Globalists’ like the radical leftist Sidney Lumet, etc. Not technically invited, a young Tom Wolfe creatively found a way to secure an invite:

Mmmmmmmmmmmmmmmm. These are nice. Little Roquefort cheese morsels rolled in crushed nuts. Very tasty. Very subtle. It’s the way the dry sackiness of the nuts tiptoes up against the dour savor of the cheese that is so nice, so subtle. Wonder what the Black Panthers eat here on the hors d’oeuvre trail? Do the Panthers like little Roquefort cheese morsels wrapped in crushed nuts this way, and asparagus tips in mayonnaise dabs, and meatballs petites au Coq Hardi, all of which are at this very moment being offered to them on gadrooned silver platters by maids in black uniforms with hand-ironed white aprons . . . The butler will bring them their drinks . . . Deny it if you wish to, but such are the pensées métaphysiques that rush through one’s head on these Radical Chic evenings just now in New York. For example, does that huge Black Panther there in the hallway, the one shaking hands with Felicia Bernstein herself, the one with the black leather coat and the dark glasses and the absolutely unbelievable Afro, Fuzzy Wuzzy-scale in fact—is he, a Black Panther, going on to pick up a Roquefort cheese morsel rolled in crushed nuts from off the tray, from a maid in uniform, and just pop it down the gullet without so much as missing a beat of Felicia’s perfect Mary Astor voice. . . .

Well, Lenny’s daughter Jamie Bernstein has a new memoir out about growing up as the daughter of such a famous conductor/radical activist. In a recent Billboard interview to promote the book, there’s no mention of Wolfe’s book nor of Lenny’s sickening virtue signaling Leftism, but there is a little drab about Lenny’s ‘enlightnened’ sexual lifestyle:

Billboard: In the last few years, his homosexuality has become more public knowledge. Is that something you were aware of growing up? Or was it just not your business?

Jamie: The long answer to this question is in my book in June, you’ll find out more then. But our parents went into their marriage with eyes open – they knew what the situation was and decided to give it a go anyway, and they were really devoted to each other. And they had us three kids, so there you have it. To whatever degree my dad was still pursuing some kind of gay life, he was keeping it extremely separate from his family life. I didn’t bump up against it until I was in college. And that was the beginning of the dissolution of my parents’ marriage. They finally separated in 1976 because my dad decided to go off with this guy who had been his assistant…

Somehow, I’m not surprised by this.