ABC’s Nightline has a surprising video report on what is essentially the coming race war in England, between British whites and ‘British muslims’ (the latter an incompatible contradiction in terms.)

Ahh… yes… the ABC reporter is herself muslim (most likely the only reason ABC allowed the story to be produced), and she certainly slants left, but there’s some good footage of “far-right” English Defense League (EDL) and their brave leader Tommy Robinson. 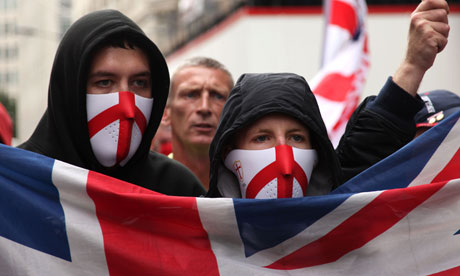 The reporter notes how she used to ‘write off’ the EDL as a bunch of racists, but did this story because she’s alarmed at how popular the EDL has become with ‘average’ British people (aka whites.)

We see Robinson walking with the reporter through a Muslim-dominated area of London that he grew up in as a child. As local Muslims recognize Robinson, they begin to hurl death threats at him, and then we see him being physically confronted on camera. (It appears from the video that Robinson may have had EDL muscle behind him, although maybe he didn’t, and it was just other whites on the street who intervene during the fracas.)

Take a wild guess which of the two sides (EDL vs. muslims) throws the first punch.

The Nightline piece then meets with the “infamous Islamic preacher named Anjem Choudary and his group of young followers in the streets of London, where they were advocating for Sharia law. Choudary, whose extremist Muslim group was banned under Britain’s Terrorism Act, refused to condemn the killing of [Lee] Rigby.”

Rigby was the British soldier beheaded in the streets of London by two black Muslims.

The Nightline reporter never asks the obvious question: Why is an Islamic preacher whose group is banned under Britain’s Terrorism Act still allowed to preach on the streets of Britain? Why isn’t such an individual deported?

The piece is also chilling as we hear one of Choudary’s sychophants not disavowing violence as a tactic. We witness one of the growing ‘sharia patrols’ that Muslims do on the streets of London. We see them converting yet another non-white ‘British citizen’ to Islam (on camera). We see them telling another potential convert: “We’re muslim first. Muslim second. Muslim last…. Not British.”

This entry was posted in Death of the West, Islam, UK. Bookmark the permalink.