The latest of Barry Obama’s martyred sons is 23-year old Sylville Smith, whose death has sparked the Milwaukee riots.

The trouble began in the afternoon around 3:30 p.m., when police pulled over a car for unspecified reasons. According to the Milwaukee Police Department, two suspects in the car chose to flee on foot. One suspect was apprehended, but the other was shot and killed during the pursuit. Police said the slain suspect was a 23-year-old man with a lengthy arrest record, who was carrying a semiautomatic handgun that was stolen in a burglary last March.

Then mayhem erupts, as BLM-ers proceed to loot and torch buildings, attack police (sending at least 6 to the hospital), and assault civilians, targeting white drivers and white-owned businesses (also not reported by the media) while shouting “Black power!”

From WaPo, we know the cop who killed Sylville is himself black. This means the media won’t be mentioning the race of the police officer very often, if at all.

The Narrative will continue unabated.

Nefataria Gordon said she knew the man who had been killed by the officer. “He was a nice, good person. He was really respected. That’s why everyone came out. They’re angry.”

In any event, if Obama had a son, he’d look a lot like Sylville Smith. 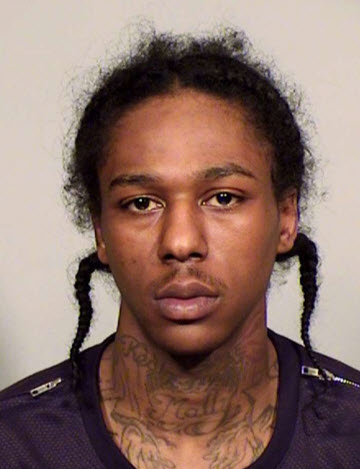 Sylville naturally had a lengthy rap sheet, especially for a 23-year old. AP summarizes them, of course starting with the less serious crimes before going to the serious crimes. That makes perfect sense.

Online court records showed multiple charges against the 23-year-old Smith dating back to 2013. One was as minor as retail theft — which was dismissed — and other less serious offenses included speeding, driving without insurance, driving with a suspended license or having open intoxicants in a vehicle.

There were more serious charges. Smith was accused in a shooting last year and charged with recklessly endangering safety, a felony.

The Milwaukee Journal Sentinel reported that Smith was subsequently accused of pressuring the victim to recant statements that identified him as the gunman and was charged with trying to intimidate a witness. The charges were dropped because the victim recanted the identification and failed to appear in court, Chief Deputy District Attorney Kent Lovern told the newspaper Sunday.

Smith also pleaded guilty to carrying a concealed weapon in 2014.

Milwaukee County Sheriff David Clarke said at a news conference that Smith had been arrested 13 times.

“He’s got a bunch of drug arrests here, robbery, use of force,” Clarke said.

And then for a hilarious, unadulterated, ‘you can’t make this sh*t up’ passage in the AP piece:

But Smith was father to a 2-year-old toddler, too, his mother said.

“My son is gone due to the police killing my son,” a distraught Mildred Haynes told the Journal Sentinel on Sunday. “I am lost.”

Smith’s younger sister, Sherelle Smith, 22, told the Journal Sentinel that her brother carried a gun because he was scared and needed to protect himself, not because he was violent. She said he was known around the neighborhood for his style and dance moves.

“He was a ladies’ man. That’s the worst thing about him,” she said

“I’m not going to say he was an angel. He was out here living his life,” Smith’s godmother, Katherine Mahmoud, told the Journal Sentinel.

I also don’t expect certain surprisingly candid statements from Sylville’s father to get much airplay. Amidst his rambling soliloquy are some kernels of truth:

“What are we gonna do now? Everyone playing their part in this city, blaming the white guy or whatever, and we know what they’re doing. Like, already I feel like they should have never OK’d guns in Wisconsin. They already know what our black youth was doing anyway. These young kids gotta realize this is all a game with them. Like they’re playing Monopoly. You young kids falling into their world, what they want you to do. Everything you do is programmed. I had to blame myself for a lot of things too because your hero is your dad and I played a very big part in my family’s role model for them. Being on the street, doing things of the street life: Entertaining, drug dealing and pimping and they’re looking at their dad like ‘he’s doing all these things.’ I got out of jail two months ago, but I’ve been going back and forth in jail and they see those things so I’d like to apologize to my kids because this is the role model they look up to. When they see the wrong role model, this is what you get. They got us killing each other and when they even OK’d them pistols and they OK’d a reason to kill us too. Now somebody got killed reaching for his wallet, but now they can say he got a gun on him and they reached for it. And that’s justifiable. When we allowed them to say guns is good and it’s legal, we can bear arms. This is not the wild, wild west y’all. But when you go down to 25th and center, you see guys with guns hanging out this long, that’s ridiculous, and they’re allowing them to do this and the police know half of them don’t have a license to carry a gun. I don’t know when we’re gonna start moving. I’ve gotta start with my kids and we gotta change our ways, to be better role models. And we gotta change ourselves. We’ve gotta talk to them, put some sense into them. They targeting us, but we know about it so there’s no reason to keep saying it’s their fault. You play a part in it. If you know there’s a reason, don’t give in to the hand, don’t be going around with big guns, don’t be going around shooting each other and letting them shoot y’all cause that’s just what they’re doing and they’re out to destroy us and we’re falling for it…”