In the NYT is a piece on the living, breathing, MSNBC embodiment of BLM philosophy having a hissy fit meltdown because her show has been getting pre-empted by ongoing political primary coverage (“Melissa Harris-Perry Walks Off Her MSNBC Show After Pre-emptions”):

In an unusually public flare-up, one of MSNBC’s television personalities clashed with the network on Friday in a dispute about airtime and editorial freedom and said she was refusing to host the show that bears her name this weekend.

The host, Melissa Harris-Perry, wrote in an email to co-workers this week that her show had effectively been taken away from her and that she felt “worthless” in the eyes of NBC News executives, who are restructuring MSNBC.

“Here is the reality: Our show was taken — without comment or discussion or notice — in the midst of an election season,” she wrote in the email, which became public on Friday. “After four years of building an audience, developing a brand and developing trust with our viewers, we were effectively and utterly silenced.”

“I will not be used as a tool for their purposes,” she wrote. “I am not a token, mammy or little brown bobble head. I am not owned by Lack, Griffin or MSNBC…

Ms. Harris-Perry is black, and Mr. Lack and Mr. Griffin are white.

And isn’t the fact that she’s black and the accused is white all that matters these days?

Ms. Harris-Perry, who is also a professor at Wake Forest University [sigh… Ed.], has hosted her MSNBC show since 2012. She has used the show to explore issues like social justice and racism, and diversity has been the centerpiece of the show since its start. 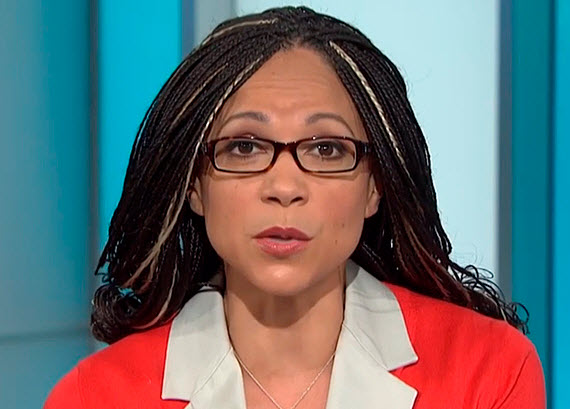 This is the increasingly unhinged woman who wore tampons for earrings on the air, attempting to make some sort of bizarre and convoluted point.

This is a woman who berated a fellow liberal guest for using the phrase “hard worker”, which Perry sees as insulting to antebellum slaves, or something like that.

Will she try a more radical, BLM-style tactic next?

This entry was posted in Black, Cultural Marxism, MSM. Bookmark the permalink.