NYT: The Faces of American Power, Nearly as White as the Oscar Nominees 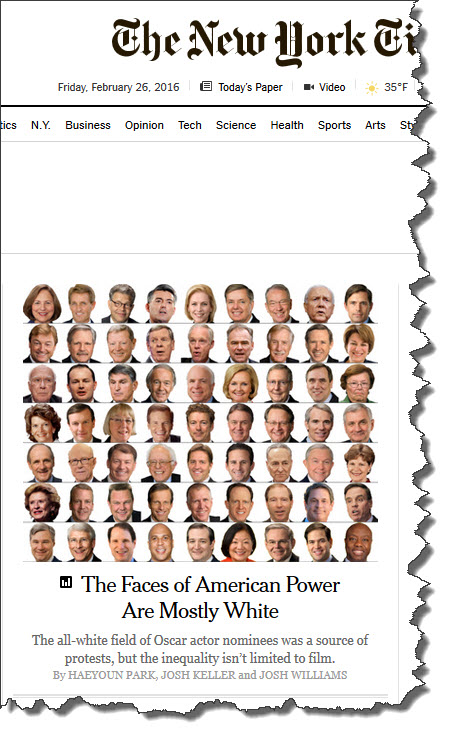 Yesterday, the NYT had a lead story with the alternate, click-bait title of “The Faces of American Power, Nearly as White as the Oscar Nominees”, because (as Sailer has noted) the latter is The Most Important Story in America right now.

The piece is comprised of a series of matrixed photo montages of faces, based on a series of categories, such as:

Those who are ‘minorities’ have their pictures prominently highlighted in yellow. Because, in each list case, the majority of faces are ‘white’, the prototypical, liberal, white NYT reader is apparently supposed to thereby become wracked with guilt.

Regarding the piece’s methodology, the NYT notes: “Race is given according to census definitions, which classify people from Europe, the Middle East and North Africa as white.”

They should come up with a special highlighting color for Jews (it’s too bad yellow is already taken), who are currently lumped together with ‘whites’. Then you’d really see the screen light up, especially in the NYT’s categories like:

And imagine how it would light up if the NYT had included a matrixed photo montage for: