In the interview, Nash refers to Neil Young as “the strangest of my friends.” Nash relays this legendary story (which I had heard many years ago):

The man is totally committed to the muse of music. And he’ll do anything for good music. And sometimes it’s very strange. I was at Neil’s ranch one day just south of San Francisco, and he has a beautiful lake with red-wing blackbirds. And he asked me if I wanted to hear his new album, “Harvest.” And I said sure, let’s go into the studio and listen.

Oh, no. That’s not what Neil had in mind. He said get into the rowboat.

I said get into the rowboat? He said, yeah, we’re going to go out into the middle of the lake. Now, I think he’s got a little cassette player with him or a little, you know, early digital format player. So I’m thinking I’m going to wear headphones and listen in the relative peace in the middle of Neil’s lake.

Oh, no. He has his entire house as the left speaker and his entire barn as the right speaker. And I heard “Harvest” coming out of these two incredibly large loud speakers louder than hell. It was unbelievable. Elliot Mazer, who produced Neil, produced “Harvest,” came down to the shore of the lake and he shouted out to Neil: How was that, Neil?

And I swear to god, Neil Young shouted back: More barn!

While Nash is best known from CSN & CSNY, I think his work with the early Hollies is his best. Check out the harmonies he lays over himself in the Hollies 1967 song “Step Inside”:

Nash is also a mighty fine photographer. Here’s a 1988 photo he took of Neil Young driving up the long road to Neil’s Northern California home: 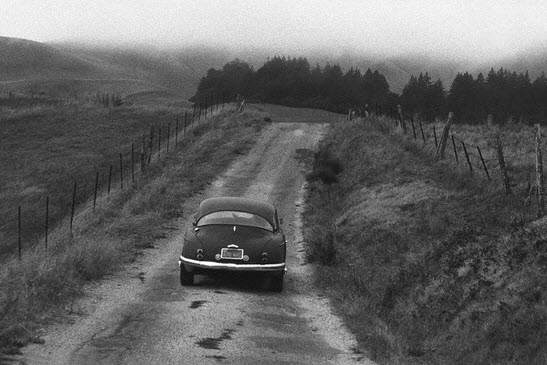