The NY Daily News has a piece on Mexican narco cartels’ savage and complete intimidation of Mexican journalism:

In the country of Mexico, there is no such thing as freedom of the press.

There is, however, widespread freedom to simply kill or kidnap journalists who dare to report on the vicious drug wars that make Mexico one of the world’s most dangerous places for residents and reporters alike.

“There’s no real hope there for journalists,” Anthony Coulson, a former DEA agent stationed in Arizona, told The Daily News. And, he added, “it’s getting worse.”

Meanwhile, Foreign Policy has a brief piece entitled “Mapping the incredible spread of Mexican drug cartels in the U.S.”

As Barack Obama heads to Mexico, U.S. involvement in Mexico’s battle against drug cartels is getting a lot of press. But it’s worth noting that Mexico’s notorious narcotics trade isn’t just Mexico’s problem anymore. And Obama should be well aware of that, considering that this past February Chicago declared Sinaloa cartel leader Joaquín “El Chapo” Guzmán its first “Public Enemy No. 1” since Al Capone. “While Chicago is 1,500 miles from Mexico, the Sinaloa drug cartel is so deeply embedded in the city that local and federal law enforcement are forced to operate as if they are on the border,” Jack Riley, the head of the Drug Enforcement Administration’s Chicago office, told CNN.

The infiltration of the Windy City shows the extent to which Mexican drug syndicates have made inroads in the United States — the Associated Press and others have reported that cartel cells are operating in Atlanta, Ga., Louisville, Ky., Columbus, Ohio, and rural North Carolina. In fact, according to an excellent National Post infographic based on data from a U.S. Justice Department report and other sources, it’s much easier to list states that don’t have a drug trade tied to Mexican gangs. There are only twelve that haven’t reported the presence of one of four Mexican cartels since 2008: Alabama, Alaska, Connecticut, Hawaii, Idaho, Maine, Montana, North Dakota, Utah, Vermont, West Virginia, and Wisconsin. The Mexican drug trade is everywhere else. 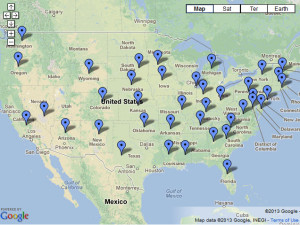 Cartel penetration into the U.S.

Detected cartel operations range from traditional drug-running to using a horse ranch as a front for laundering drug money, as one group did in Oklahoma. The Sinaloa cartel, which has emerged as Mexico’s dominant syndicate, has carved out new territory in the United States by controlling 80 percent of its meth trade (Mexican cartels have come to dominate the U.S. market by aggressively bumping up the purity of their meth while dropping the price per gram).

All told, Mexican cartels reside in 1,200 American communities as of 2011, up from 230 in 2008, according to the Associated Press. Below is a map that shows just how many states have been penetrated, according to the National Post‘s special report on the topic.