This one is a lefty cross referencing orgasm. Over at PBS.org, Mychal Denzel Smith, Knobler Fellow at The Nation Institute, contributing writer for The Nation Magazine, blogger for TheNation.com, contributor to Feministing.com and Salon, and who appears mulatto, writes on “White Millennials are products of a failed lesson in colorblindness“.

Research shows that white millennials, having among other things watched the U.S. elect a black President… twice… see equality of opportunity having been reached. Subsequent lack of equality in results, such white millennials believe to a disproportionate degree, is the fault of blacks.

Hence, Smith is worried of what this entails for cultural Marxism:

For Millennials, racism is a relic of the past, but what vestiges may still exist are only obstacles if the people affected decide they are. Everyone is equal, they’ve been taught, and therefore everyone has equal opportunity for success. This is the deficiency found in the language of diversity. We have spent the post-Civil Rights era concerned with whether or not there is adequate representation for racial minority groups within our existing institutions, not questioning whether these institutions are fundamentally racist and rely on white supremacy for their very existence. Armed with this impotent analysis, Millennials perpetuate false equivalencies, such as affirmative action as a form of discrimination on par with with Jim Crow segregation. And they can do so while not believing themselves racist or supportive of racism.

A further encouraging sign is another PBS.org alarmist piece of late, entitled “The hidden racism of young white Americans” (what subtlety!) has Sean McElwee wringing his liberal hands over what he calls the ‘Bill O’Reilly Generation’.

The data below visualize the percentage of whites in each age group espousing the explicitly racist idea that blacks are not hardworking or intelligent, as well as the percentage who say that blacks face little or no discrimination. Finally, I include the percentage of whites in each age group who say they have “never” felt admiration for blacks. The youngest whites (17-34) are only modestly less likely than the oldest (65+) to say that blacks are lazy (3.6 point difference) or unintelligent (1.5 point difference), but they are also less likely to perceive discrimination against blacks (6.3 point difference) and far less likely to say that have felt admiration for blacks. Compared to the generation immediately before them (white aged 35-49) the youngest whites are slightly more likely to say blacks are lazy (2.4 points) and unintelligent (4.3). In sum, it’s clear that age has little effect on the likelihood that whites hold racially-biased feelings about blacks.

The data he’s referring to contains encouraging graphs such as the following, which appears to show the ‘60s Baby Boomer generation a possible aberration of political correctness, sandwiched in between their ‘racist’ parents’ generation and what appears to be an equally ‘racist’ Millennial generation. 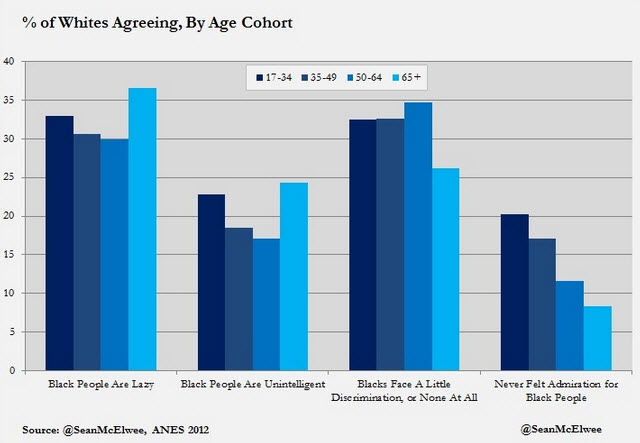 This entry was posted in Cultural Marxism, Race. Bookmark the permalink.