The Economist has a brief piece on “Unhappy Jewish America”, which begins:

THE Vietnam war was raging when Sheldon Zimmerman arrived in Manhattan as a young rabbi. His liberal beliefs blended seamlessly with his Judaism: he once took a youth group from his synagogue to an anti-war march. A few years earlier rabbis marched with Martin Luther King in Selma, Alabama. Jews risked (and lost) lives fighting for civil rights in the South.

Oi, vey. If that isn’t the story of the century.

In a parallel to the JAPCAT phenomenon, might this be another twist to the Great Jewish Crack-Up of 2015?

Jewish support for Democrats has slipped ten percentage points since 2008, with very religious and male Jews leading the shift rightwards. But support fell from sky-high levels. And with only 5m Jewish-Americans, depending on how they are counted, they routinely swing elections in only a few places, of which Florida is the most important. The Democrats’ problem is that Jewish supporters stiffen the party’s “organisational backbone” and donate a lot of money, argues Benjamin Ginsberg of Johns Hopkins University. Republicans do not need Jewish votes, he says: “What they need is for Jews to support Democrats less.”

Since the terror attacks of 2001, support for Israel has united Republicans. National security hawks and religious conservatives see Mr Netanyahu as a hero in a civilisational clash with radical Islam. In contrast, Israel divides the left. Rabbi Rick Jacobs of the Union for Reform Judaism, representing almost 900 synagogues, worries that if Israel becomes a partisan issue, liberal Jews will not vote Republican but they may drift away from Israel. These are anxious times. Jews have rarely had to choose between their American and Jewish identities: that has been one secret of America’s success. They do not want to start now.

Since the 1960s, it is true, Jews have rarely had to choose between their American and Jewish identities… because they have succeeded – ala Frankfurt School cultural inroads – in transforming America’s culture into what is tantamount to a Jewish one.

Also, the article has an accompanying cartoon that, were it published in a conservative outlet would lead to immediate accusations of ‘anti-Semitism’. 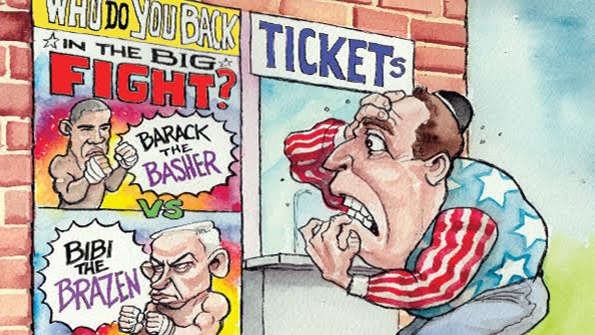 This entry was posted in Democrat Party, Jewish, Republican Party. Bookmark the permalink.