Pew Research has terrifying poll results measuring the willingness of various Americans to curtail free speech that might be ‘offensive’ to minorities.

Even though a larger share of Millennials favor allowing offensive speech against minorities, the 40% who oppose it is striking given that only around a quarter of Gen Xers (27%) and Boomers (24%) and roughly one-in-ten Silents (12%) say the government should be able to prevent such speech.

In other words, among the widest swings in position are non-white, female, Democrats. 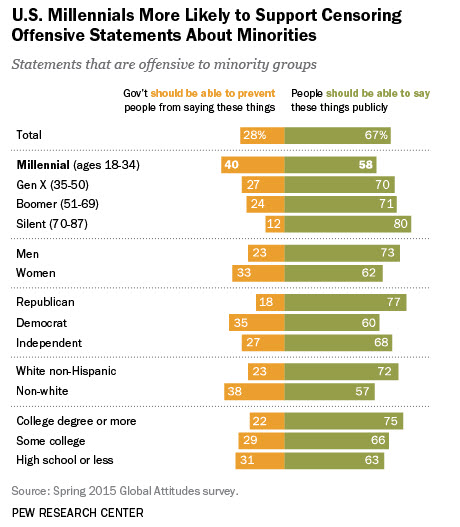 The new eagerness to embrace the word reflects the climate that a Pew poll captured, in 2011, when more respondents between the ages of eighteen and twenty-nine reported a positive view of “socialism” (forty-nine per cent) than “capitalism” (forty-six per cent). (Gallup polls regularly find that a slim majority of Democrats express a positive view of socialism, but an overwhelming majority supports “free enterprise,” suggesting, charitably, some ideological flexibility.) Those under-thirty respondents are, of course, the first voters of the post-Soviet era, whose formative experiences are of a not very heroic unipolar world of American power and market-oriented ideas. The fall of the Berlin Wall and the collapse of the Soviet empire put the word “socialism” up for grabs again: it may have landed in the dustbin of history at first, but that left it free for scavenging and repurposing.

This entry was posted in National, Political Correctness. Bookmark the permalink.