Illegal immigrant Francisco Sanchez has been deported from this country five times before, but always managed to come back. How can that be, given how secure our borders are. (Anyone who disagrees with that assessment is synonymous with Donald Trump, you know.)

Before he went on to shoot and kill Kathryn Steidle along Pier 14, right in front of her father (her last dying words were “Dad, help me…”), the People’s Republic of San Francisco released Sanchez after a marijuana violation, when federal immigration law (still existing, believe it or not!) required them to hand him over to ICE. Sanchez was even a ‘priority request’, meaning local enforcement should immediately contact ICE if such an individual is found in the U.S.

S.F. didn’t, because S.F. is an enlightened, progressive “sanctuary city”, and now a woman (and U.S. citizen) is dead. Sanchez chose S.F. because of it’s vibrant cultural scene. Er, actually he chose the city for other reasons:

Sanchez said in a new interview Sunday with a local ABC News affiliate that he came to San Francisco because he knew the sanctuary city would not hand him over to immigration officials.

As Steve Sailer spotted the other day, this is how the NYT story decided to frame the story: “Slain Woman’s Parents Focused on Healing, Not Sanctuary Law“.

No Ferguson-style coverage here. No Charleston church shooting coverage, with endless attempts to find ‘white supremacists’ under every rock, here.

So, how does one square that angle with this very differently-angeled story from The Daily Mail?

The family of a California woman who was allegedly shot dead by an illegal Mexican immigrant have criticized officials who didn’t hand him over after he was jailed just months before the attack.

Grieving relatives of Kathryn Steinle, 32, who was shot dead on San Francisco’s Pier 14 Thursday night, made the comments in light of revelations that alleged killer Francisco Sanchez, 45, had already been sent back over the border five times.

Immigration officials said that they had made him a ‘priority’ request for any law enforcement officers who picked him up.

But when he was arrested over marijuana four months ago in San Francisco he was let go, in accordance with city policy designed to give ‘sanctuary’ to undocumented migrants…

ICE spokeswoman Virginia Kice said Sanchez had a ‘detainer’ on his status, meaning federal officials had flagged him for detention with notification sent to state and local authorities. 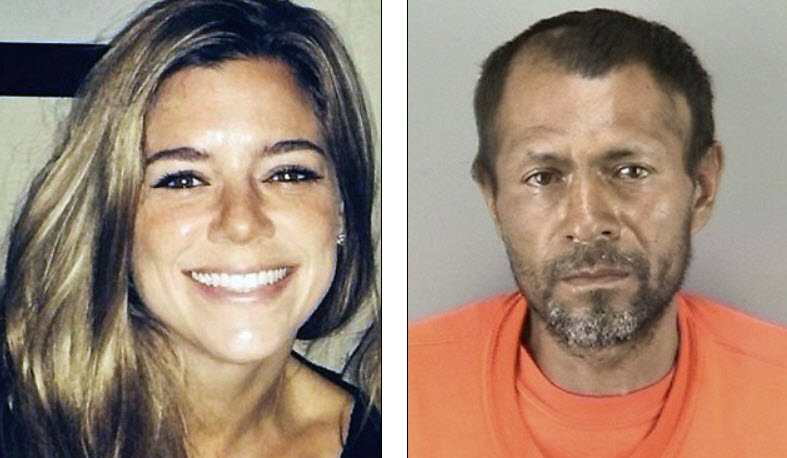 Guess which one is the 5-time deported illegal