On CNN this afternoon, Jake Tapper was talking about ISIS with a panel that included former Congresswoman Jane Harman (D-CA). Harman resigned from Congress in 2011 and is now the President and CEO of the Woodrow Wilson International Center for Scholars. 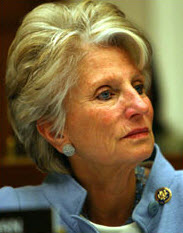 At one point, in a discussion of online recruiting of ISIS fighters, Harman mentioned her belief that the U.S. needs to “get ahead of the game” in terms of utilizing social media. She then threw, from out of left field, a firebomb of moral equivalency where she cautioned that it’s not just ISIS recruiting on the internet, but that we also need to be concerned about various “white supremacist” groups “recruiting” on the internet right here in the U.S.

I am unaware of any “white supremacist” groups “recruiting” (this loaded term implying recruitment for some form of violent activity) on the internet. Does she mean to imply, alternatively, that a white individual simply reading stories on AmRen or VDARE (and, gasp, actually agreeing with the opinions of some of these sites’ writers) is tantamount to such “recruiting”?

My Jew radar instantly went up. Is Jane Harman Jewish? If so, how ethnocentric is she? Well, it didn’t take long to definitively answer that question.

Harman was born Jane Margaret Lakes in New York City, the daughter of Lucille (née Geier) and Adolf N. Lakes. Her father was born in Poland and escaped from Nazi Germany in 1935; he worked as a medical doctor. Her mother was born in the United States and was the first one in her family to receive college education. Her maternal grandparents immigrated from Russia…

Jane also married within the Tribe (Jewish endogamy?! Say it ain’t so), marrying and divorcing one Jew and then, at the age of 35 and immediately upon her divorce, finding true love with a 61 year old Jewish man… who just happened to be a multi-millionaire (coincidence):

Harman married Richard Frank in 1969 and divorced him in 1980; later that year, she married Sidney Harman, 26 years her senior.

Most salient in any discussion of Ms. Harman’s ethnocentrism is this little episode Sweet Jane was involved in:

In 2009, it was revealed NSA wiretaps reportedly intercepted a 2005 phone call between Harman and an agent of the Israeli government, in which Harman allegedly agreed to lobby the Justice Department to reduce or drop criminal charges against two employees of AIPAC in exchange for increased support for Harman’s campaign to chair the House Intelligence Committee. The NSA transcripts reportedly recorded Harman ending the phone call after saying, “this conversation doesn’t exist.”

On this matter, with respect to MSM coverage at the time, Mondoweiss gets right to the point:

The front-page story in the Times yesterday on the Jane Harman allegations didn’t say that she’s Jewish. Neither does CQ, which broke the story. Chris Matthews didn’t say she’s Jewish in his report last night–though he’s always talking about the Irish Catholics–and neither did Robert Siegel on NPR. I bet Andrea Mitchell didn’t either.

Jane Harman’s Jewish. There, I just said it. That’s why we have the blogosphere. Any intelligent person discussing this story at dinner is going to mention that she’s Jewish. That’s because Alan Dershowitz said that supporting Israel is the “secular religion” of American Jews. And because Walt and Mearsheimer point out that Jewish-Americans play a prominent part in the Israel lobby…

Do you think it’s possible to talk about the power of the Israel lobby, which is what the Harman leak is about, at bottom, without talking about religion in American life? And without Jewish reporters talking about the religious orthodoxy they’re familiar with? No. Heck, Wolf Blitzer, who did this story on CNN yesterday (and I bet left out the religious angle), used to work at AIPAC. Does Judaism/Israel matter to him? Oh and how many Jews are in Congress and the media? Just because you talk about this doesn’t make you Ahmadinejad.

In more recent years, Harman has flip-flopped on supporting a resolution recognizing the Armenian Genocide.