The Organizer’s illegal alien aunt has passed on, from food stamps and public housing to to that great immigration journey in the sky:

President Barack Obama’s aunt Zeituni Onyango, who was denied asylum in the United States but stayed illegally for years, died Tuesday at age 61. 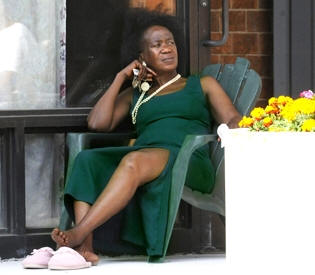 Onyango, whose immigration status was reported by The Associated Press days before Obama’s election in 2008, had been treated in recent months for cancer and respiratory problems, Cleveland attorney Margaret Wong said. She died in a Boston rehabilitation center, said Wong, who represented her in her immigration case.

Onyango, a half-sister of Obama’s late father, moved from Kenya to the U.S. in 2000 and was denied asylum by an immigration judge in 2004. She remained in the country illegally, living in Boston public housing…

Obama, in his memoir “Dreams from My Father: A Story of Race and Inheritance,” affectionately referred to Onyango as Auntie Zeituni and described meeting her during his 1988 trip to Kenya. She helped care for his half-brothers and sister while living with his father, Barack Obama Sr., in Kenya.

This entry was posted in Immigration, National. Bookmark the permalink.