Lemmy Kilmister, founding member and frontman of Motörhead, has died at the age of 70.

His health had been been failing for the past year or so, and despite many metallers’ belief that Lemmy would live forever, all things must come to end.

Given his lifestyle, it’s amazing he lasted this long: 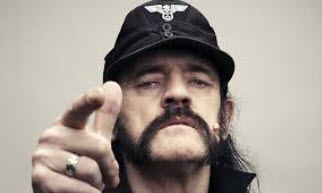 Lemmy’s outlandish behavior further fueled his icon status. He was fired from Hawkwind after being arrested at the Canadian border for drug possession, yet his appetite for drugs and alcohol remained a constant throughout most of his career. He famously claimed he had drunken a bottle of Jack Daniel’s every day since turning 30, and he was also a proponent of amphetamines.

Just two days ago, Lemmy had been diagnosed with an aggressive form of cancer.

Kilmister — who legendarily survived diabetes and implantation of a heart defibrillator — was diagnosed with the disease just two days ago, the band said in a statement.

“There is no easy way to say this,” Motörhead said. “Our mighty, noble friend Lemmy passed away today after a short battle with an extremely aggressive cancer.

“He had learnt of the disease on December 26th, and was at home, sitting in front of his favorite video game from The Rainbow which had recently made it’s way down the street, with his family,” the band said.

That last paragraph above is quite something, given how for decades one of Lemmy’s favorite pastimes was to sit at the bar of The Rainbow (located on the Sunset Strip, just around the corner from Lemmy’s apartment) and play whatever video game they had installed.

About a month ago, I was lucky enough to see Motörhead play live.

I highly recommend the 2010 documentary Lemmy, which is (in the respectable world of rock documentaries) a very good one.