From the WSJ (“Supersmart Robots Will Outnumber Humans Within 30 Years, Says SoftBank CEO”):

BARCELONA—Within 30 years, artificial intelligence will be smarter than the human brain.

That is according to Masayoshi Son, chief executive of SoftBank Group Corp., who says that supersmart robots will outnumber humans and more than a trillion objects will be connected to the internet within three decades.

This has implications not only for job automation, but will introduce dynamics with a destructive potential for humanity itself.

Like Ray Kurzweil, Masayoshi Son believes we’ll enter The Singularity within 30 years. One must keep in mind The Law of  Futurology, which serves to introduce a healthy dose of skepticism about the timing: 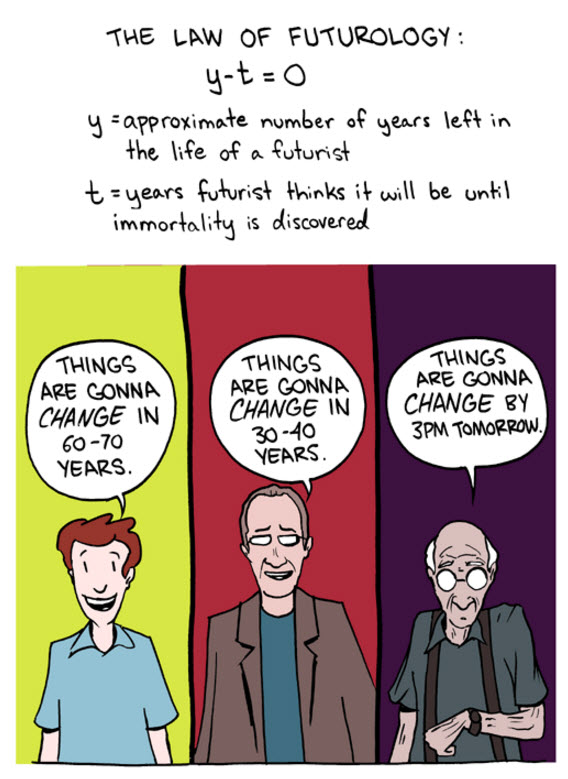 Nonetheless, the trajectory for A.I. (and nanotechnology) itself is clear.

Does Son see the urgency of society ‘dealing’ with the ramifications of this? Well… yes… but not in the way you might think:

This 30-year forecast created urgency, Mr. Son said in a speech at the telecom industry’s biggest trade show, Mobile World Congress. “That is why I’m in a hurry to aggregate cash to invest.”

These beliefs underpin the wave of large and surprising deals the Japanese internet and telecommunications company has pulled off in the past year, he said Monday. These include starting a $100 billion technology-investment fund with a Saudi sovereign-wealth fund, buying British microprocessor designer ARM Holdings PLC for $32 billion and acquiring U.S. asset manager Fortress Investment Group PLC for $3.3 billion.

In a brief interview after his speech, Mr. Son said his $100 billion project with the Saudis, dubbed the SoftBank Vision Fund, was bigger than the $65 billion in combined investments from the venture-capital world. He said the SoftBank Vision Fund would be focused. “Artificial intelligence, Internet of Things, smart robots: Those are the three main things I’m interested in,” he said.

The Internet of Things is the technology world’s term for connecting everyday objects, such as refrigerators and sneakers, to the web.

Mr. Son said he didn’t expect oil company Saudi Aramco’s planned initial public offering of stock to affect the size of Vision Fund. “They are a great partner,” he said of the Saudis. “They’re already rich. They have lots of money, even before the IPO.”

The Saudis & nanotechnology. What could possibly go wrong!

In his speech, Mr. Son said that while average humans had an IQ of roughly 100 and that geniuses such as Albert Einstein were believed to score about 200, superintelligent computers would have IQs of 10,000. He said computer chips possessing superintelligence would be put into robots big and small that can fly and swim. These robots would number in the billions and would be greater than the human population within 30 years, he said.

As I’ve previously written about, the dark side of nanotechnology (and especially the adjunct, potential prospect for self-replicating machines) is quite likely. See Bill Joy’s ‘grey goo’ paper and Nick Bostrom’s work on Human Extinction Scenarios. In fiction, the grey goo scenario is a premise of Michael Crichton’s novel Prey, as well as Kurt Vonnegut’s ’60s novel, Cat’s Cradle, wherein a fictitious, synthetic “ice-nine” poly-water converts every drop of water it touches into a solid. Placing one drop of ice-nine into a lake leads to the adjacent molecules of water in the lake to turn solid, and so on. Very soon, all the water on the planet has been turned into an ice-nine solid.

Given the trajectories of globalization, modern communications, and economies of scale, the possibility of the total destruction of mankind from malicious nanotechnology run amok is greatly accelerated. Throw in the competitive nature of capitalism, as well as the inherent need for autonomous nation-states to continuously improve their military defense (as well as offense) capabilities, and this acceleration is almost inevitable.

Basically, we’re talking about the possibility of a nanotechnological weapon of mass destruction. Such a weapon could assume a myriad of forms: a deliberate, synthetic contamination of livestock or some other food supply chain; the creation of an immune-resistant bacteria or virus that wipes out plant, animal, or human life; etc.

All that is required is:

This entry was posted in Economics, Nanotechnology, Sociology, Technology. Bookmark the permalink.