In “Scottish Secession: A Beacon of Hope in an EU Intent on Dissolving National Identity“, Kevin MacDonald provides lots of good detail on Scotland’s upcoming referendum for independence from the U.K. While politics in Scotland is rife with socialists, there is yet a solid degree of nationalism, an emergent theme in Western European politics: 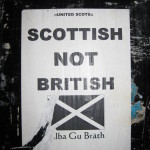 Despite being, at 5.3 million, only 8.4% of the UK’s population, Scotland contributes 9.9% of the taxes and only receives spending equal to 9.3% in return.) They provide subsidised care for the elderly and infirm, have a universal healthcare system on par with their Scandinavian counterparts (with free medical prescriptions) and have abolished University fees.

These policies only apply exclusively to Scots who live in Scotland, much to the chagrin of the British establishment. But for ordinary Scots, they have been welcomed as a sign of a government putting its own people first—quite possibly an indication of an implicit if not explicit ethnic/racial nationalism in a country that, as noted below, is still 96% White.

This entry was posted in Politics, Secession, UK. Bookmark the permalink.