Did *you* know that Nelson Mandela’s “real” name (his clan name) is “Madiba”? I didn’t.

But Barry sure knew. 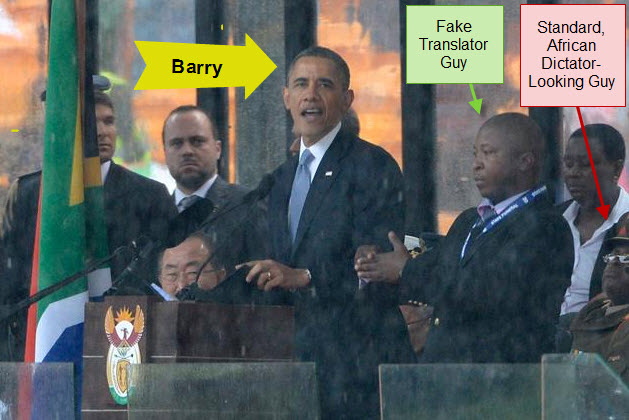 Wait. I thought black South Africans, and St. Mandela in particular, were beyond race, beyond clan… in fact, beyond racist Western notions that it’s in the self-interest of tribe X (or race X)  to ensure the nation they built, and live in, maintains a population that is majority tribe X.

And so, with the cute ‘n cuddly koala bear’s passing, we may have reached the apex (?) of pure, unadulterated folklore with a new poem by St. Maya Angelou about Nelson Mandela’s death. (Primer: Maya Angelou stands as the embodiment of white liberalism’s child-like political philosophy on race relations. If she didn’t exist, white liberals would’ve had to invent her.)

Angelou’s poem was unveiled in an appropriate Marxist setting, on some sort of podcast by the Marxist Democracy Now! site. The poem begins:

His day is done.
Is done.
The news came on the wings of a wind, reluctant to carry its burden…

Yup, that’s how it starts.

I’d leave it at that, but I can honestly say I was quite surprised to see a line mentioning the Boers (in a non-negative context?):

Our spirits reach out to you Bantu, Zulu, Xhosa, Boer.
We think of you and your son of Africa, your father, your one more wonder of the world…

Is this Angelou implicitly acknowledging the Boers’ right to citizenship (and existence), or am I being naïve?

We have the Madiba family actin’ all MLK-family-like (and, as it may turn out, Trayvonn-family-like), that is, actin’ like most blacks who stumble into easy money:

JOHANNESBURG (Reuters) – From political posters to bottles of wine and kitchen aprons, the face and name of Nelson Mandela are a potent commercial and political brand in South Africa. Little wonder it’s so sought after – and the source of occasional squabbles.

Following his death on Thursday at the age of 95, the scramble for control of the Mandela legacy – both financial and moral – will involve his family, the ruling African National Congress (ANC), and the Nelson Mandela Foundation he set up to protect his broader message.

At stake is the inheritance that will go to Mandela’s more than 30 children, grandchildren and great grandchildren, some of whom already use the Mandela name and image to market everything from clothing to reality TV.

Hey, it’s hard out here for a pimp.

A legal tussle between Mandela’s long-time friend, lawyer George Bizos, and two of Mandela’s daughters became public this year as the daughters sought to have Bizos and other Mandela associates ousted from companies set up to sell his handprint for use in art and memorabilia.

According to an affidavit filed by Bizos and the others, the two daughters, Makaziwe Mandela and Zenani Dlamini, had been trying to gain control of the main Mandela Trust since 2005 and eventually became trustees without Mandela’s knowledge.

Mandela became angry when he found out what the daughters had done, Bizos and the other associates said in the affidavit.

“Mr Mandela was shocked and used a common expression ‘Good Lord!’ He was most infuriated and wanted to know what had happened.”

A portion of the revenue from the Foundation’s 46664 clothing line – named after Mandela’s prisoner number on Robben Island – and the artworks also goes to pay for family members’ education, according to Bizos.

“The trust has adopted the procedure of requiring the applicant for money to furnish an invoice,” Bizos said, adding that every request accompanied by proper paperwork has been granted.

But some family members have asked for a lump sum payment of 12 million rand, he added.

Such demands fuel the notion, widely held in South Africa, that some of Mandela’s children have exploited their father.

“This is what we are, in a sense, entitled to, that my father worked for, and he did it with his own hands to create something for the welfare and upkeep of himself and his children,” she told the Financial Times in April.

“If everybody wants a little bit of the Madiba magic, why is it so sacrilegious for the rightful owners … to use the Madiba magic?” she said, referring to her father by his clan name.

That pretty much says it all.

This entry was posted in Africa, Left. Bookmark the permalink.