Of Jonathan Leibowitz’s decision to leave The Daily Show, Hank Stuever has a piece in WaPo titled “It was time for Jon Stewart to wrap up the joke anyway”. The piece actually begins thusly:

Comedy Central’s Jon Stewart got in the habit of being correct about most things, thanks to his own intelligence as well as the cleverness of the writers and researchers who made “The Daily Show With Jon Stewart” an unwavering success for 16 years in the thorny fields of political satire and media criticism. 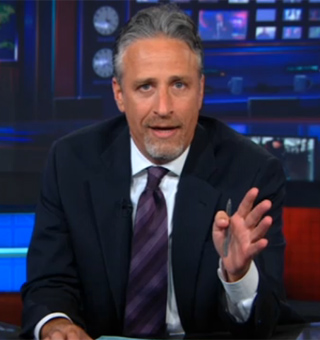 After I spit soda I my screen from laughter, I then stumbled across Conor Friededsdorf’s “The Next Daily Show Host Should Forget Fox News” in The Atlantic.

Then, in “The House That Jon Stewart Built”, Matt Ford writes “the comedian’s style of left-wing humor ran low on targets”.

‘Low on targets’ translates into ‘FNC and GOP.’

The same repeated joke formula that comprises 95% of the Daily Show. Naturally an ally of TDS’s politics, Ford writes:

Stewart’s style of left-wing humor fed on the absurdity of his mostly conservative targets. His tried-and-true format was the clip-joke-clip-joke segment he’d use to open the show. First, he’d run a clip of a member of Congress or news anchor saying something absurd, followed by Stewart’s puzzled reaction—the straight-man foil to the news cycle’s comic tendencies. He’d then ask a reasonable question or make a reasonable inference, only to see his presumptions defeated by an even-more-absurd clip. Eventually, the tit-for-tat of real-world footage and Stewart’s incredulous mockery would crescendo into a short, semi-comedic insight, and then he’d cut to his first commercial break.

The degree of MSM hagiography surrounding Stewart’s announcement is truly astonishing. On MSNBC yesterday, it was “Breaking News” on Mr. Rachel Maddow’s show.

And yet these people don’t get it.

The above schtick is all Stewart has/had.

His old Jewish guy routine grew tiring a long, long time time ago… as has the continuously meta-irony of the Court Jesters.

This entry was posted in Culture Wars, TV. Bookmark the permalink.