The Death of Clintonism & The Dying (?) of the Democratic Party

The Democratic Party’s quadrupling down on political correctness and identity politics will not be without consequences in future elections. 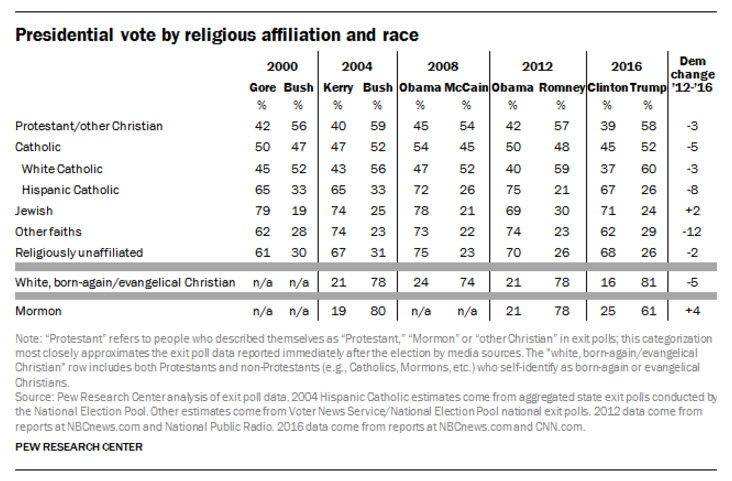 In The Atlantic, we have “Democrats Have a Religion Problem”, the subtitle of which reads “A conversation with Michael Wear, a former Obama White House staffer, about the party’s illiteracy on and hostility toward faith.”

In the interview, Wear, who is a clearly a Leftie on most issues, notes:

[T]here’s a religious illiteracy problem in the Democratic Party. It’s tied to the demographics of the country: More 20- and 30-year-olds are taking positions of power in the Democratic Party. They grew up in parts of the country where navigating religion was not important socially and not important to their political careers. This is very different from, like, James Carville in Louisiana in the ’80s. James Carville is not the most religious guy, but he gets religious people—if you didn’t get religious people running Democratic campaigns in the South in the ’80s, you wouldn’t win.

Another reason why they haven’t reached out to evangelicals in 2016 is that, no matter Clinton’s slogan of “Stronger Together,” we have a politics right now that is based on making enemies, and making people afraid. I think we’re seeing this with the Betsy DeVos nomination: It’s much easier to make people scared of evangelicals, and to make evangelicals the enemy, than trying to make an appeal to them…

There are reports that high-level Democratic leadership was not interested in reaching out to white Catholics. And they sure didn’t have a lot of interest in white evangelicals. That’s a huge portion of the electorate to throw out.

The interview’s most salient passage is yet further illustration of how The Organizer was something of a political ‘fluke’, and a phenomenon not likely to be replicated by the Democratic Party any time soon:

Barack Obama was the perfect transitional president from the old party to the new. He could speak in religious terms in a way that most white, secular liberals were not willing to confront him on. He “got away with” religious language and outreach that would get other Democratic politicians more robust critiques from the left. He was able to paper over a lot of the religious tensions in the party that other, less skilled politicians will not be able to paper over.

Meanwhile, from a long Politico piece on “The Death of Clintonism”, comes a handful of poignant observations:

Clinton was trapped, too, by her service as Obama’s secretary of state and her need to appeal to his winning coalition. She could not, or would not, say aloud what others in her party knew: That Obama had not only largely overlooked the concerns of white working-class voters but, with his health care overhaul, had been seen as punishing them financially to provide new benefits to the poorest Americans. Fairly or not, he lost the public argument.

The other truth is that a huge part of Clintonism was always Bill Clinton himself, and his singular ability to speak to both the most elite audiences and the most everyday ones in ways that could move each, with a unique combination of the Ozarks and Oxford that has rarely if ever been seen in contemporary American politics. Hillary Clinton’s best efforts to retail a retooled version of Clintonism in 2008 crumbled in the face of Obama’s promise of hope and change.

“Bill Clinton himself was Bubba,” as Kamarck puts it. “He always got that.” It was no accident that Clinton and Jimmy Carter—two white Southerners—stand as two of the only three Democrats to win the White House in the past half century (or that Obama had demographic advantages as an African-American that were not easily transferred to Hillary Clinton).

“You didn’t hear a lot of people putting in context that before Bill Clinton, Republicans had controlled the White House for 20 of 24 years, that his last six years in office were with an all-Republican Congress, or that the main reason he got crushed in 1994 was that he was perceived as being too progressive on health care.

It’s truly astonishing how, impression-wise, one man (with, literally, the entire political class against him) has completely reversed the narrative on which of the two major political parties is actually in the political wilderness.

This entry was posted in Democrat Party, Religion. Bookmark the permalink.