The Dinosaur vs. King Kong 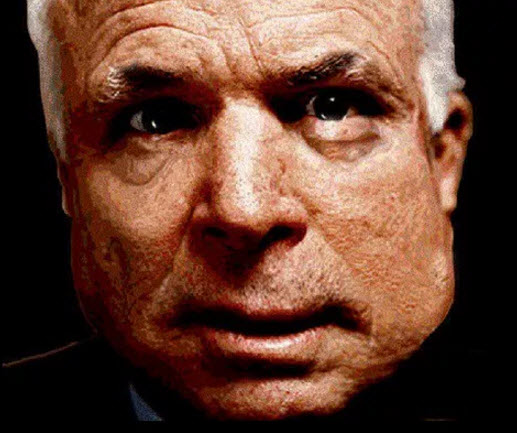 Sen. John McCain spoke out Saturday in defense of the free press after President Donald Trump lashed out against the news media several times over the past week, at one point declaring it “the enemy of the American People!”

Such talk, McCain, R-Ariz., said on NBC News in an interview set to air Sunday, was “how dictators get started.”

“In other words, a consolidation of power,” McCain told “Meet the Press” host Chuck Todd from Munich. “When you look at history, the first thing that dictators do is shut down the press. And I’m not saying that President Trump is trying to be a dictator. I’m just saying we need to learn the lessons of history.”

So, calling some media outlets, with on overt anti-Trump bias, ‘fake news’ is tantamount to ‘shutting down the press’?

These days, it is difficult not to notice McCain, whose dissenting voice can be heard – and is often amplified – criticizing Trump. In the four weeks since Trump’s inauguration, McCain has made headlines rebutting White House press secretary Sean Spicer and ripping Trump’s worldview in a speech in Munich without ever mentioning the president’s name.

Even before the inauguration, McCain was emerging as one of the few Republicans who was not afraid to criticize Trump, blasting the president-elect’s reported consideration of reinstating waterboarding as an interrogation technique.

Always with the waterboarding, which has been used a whopping 3 times, one of these times against KSM.

This week, McCain appears on the cover of the Feb. 20 issue of New York magazine, where he candidly discusses operating in the Trump administration in a nearly 5,000-word profile by Gabriel Sherman, the magazine’s national affairs editor.

He’s 80 years old and he still angles to get on the cover of magazines? You know what that tells me? That he will never retire. He will never die. He is immortal. Don’t you know that?

In one particularly strongly worded exchange, McCain does not hold back on how he views the severity of alleged Russian interference in the American presidential election.

“The severity of this issue, the gravity of it, is so consequential because if you succeed in corrupting an election, then you’ve destroyed the foundation of democracy,” McCain told Sherman. “So I view it with the utmost seriousness. I view it more seriously than a physical attack. I view it more seriously than Orlando or San Bernardino. As tragic as that was, the far-reaching consequences of an election hack are certainly far in excess of a single terrorist attack.”

As I have been expecting since November, McCain, who came close to running as Kerry’s VP candidate in 2004, & his Delta Queen ‘friend’ Lindsay will be the biggest obstacles to Trump, not the Democratic Party, the latter of whom is now the Party of Super-No.