The drink of the month is The Last Word, the recipe below being adjusted somewhat by my own tastebuds. 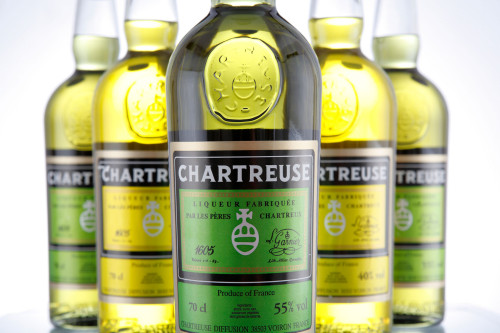 Pour gin, Chartreuse, lime juice, and maraschino liqueur into a cocktail shaker. Add ice; cover and shake vigorously 10 times. Strain into 2 chilled coupe or Martini glasses. Garnish each with a lime twist. [NOTE: Maraschino liqueur is *not* the same as ‘cherry liqueur’, which I had originally assumed. They are very different in taste. The only maraschino liqueur I could find in my zip code, and which happens to be the ‘go to’ brand, is Luxardo.]

While the conventional Last Word recipes tend to call for equal parts gin, Chartreuse, and the rest, I find that doubling-up on the gin (as a base) puts the Chartreuse into a much better perspective.

In other words, a little Chartreuse goes a long way.

A couple of months ago, I finally tasted Chartreuse, the culinarily cloistered French liqueur with a most unique and mysterious history.

Chartreuse is a French liqueur made by the Carthusian Monks since 1737 according to the instructions set out in the secret manuscript given to them by François Annibal d’Estrées in 1605. It is composed of distilled alcohol aged with 130 herbs, plants and flowers. The liqueur is named after the Monks’ Grande Chartreuse monastery, located in the Chartreuse Mountains in the general region of Grenoble in France. The liqueur is produced in their distillery in the nearby town of Voiron (Isère)…

Chartreuse has a very strong characteristic taste. It is very sweet, but becomes both spicy and pungent. It is comparable to other herbal liqueurs such as Galliano, Liquore Strega or Kräuterlikör, though it is distinctively more vegetal…

According to tradition, a marshal of artillery to French king Henry IV, François Hannibal d’Estrées, presented the Carthusian monks at Vauvert, near Paris, with an alchemical manuscript that contained a recipe for an “elixir of long life” in 1605. The recipe eventually reached the religious order’s headquarters at the Grande Chartreuse monastery, in Voiron, near Grenoble. It has since then been used to produce the “Elixir Végétal de la Grande Chartreuse”. The formula is said to call for 130 herbs, plants and flowers, and secret ingredients combined in a wine alcohol base. The monks intended their liqueur to be used as medicine. The recipe was further enhanced in 1737 by Brother Gérome Maubec.

The beverage soon became popular, and in 1764 the monks adapted the elixir recipe to make what is now called Green Chartreuse. In 1793, the monks were expelled from France, and manufacture of the liqueur ceased. Several years later they were allowed to return. In 1838, they developed Yellow Chartreuse, a sweeter, 40% alcohol (80 proof) liqueur, colored with saffron.

The monks were again expelled from the monastery following a French law in 1903, and their real property, including the distillery, was confiscated by the government. The monks took their secret recipe to their refuge in Tarragona, Spain, and began producing their liqueurs with the same label, but with an additional label which said Liqueur fabriquée à Tarragone par les Pères Chartreux (“liquor manufactured in Tarragona by the Carthusian Fathers”).

At the same time, a corporation in Voiron that obtained the Chartreuse assets produced a liqueur without benefit of the monks’ recipe which they sold as Chartreuse, but all attempts to reproduce real Chartreuse failed. Sales were very poor, and by 1927 the production company faced bankruptcy, and its shares became nearly worthless. A group of local businessmen in Voiron bought all the shares at a low price and sent them as a gift to the monks in Tarragona.

After regaining possession of the distillery, the Carthusian brothers returned to the monastery with the tacit approval of the French government and began to produce Chartreuse once again. Despite the eviction law, when a mudslide destroyed the distillery in 1935, the French government assigned Army engineers to relocate and rebuild it at a location near Voiron where the monks had previously set up a distribution point. After World War II, the government lifted the expulsion order, making the Carthusian brothers once again legal French residents.

Today, the liqueurs are produced in Voiron using the herbal mixture prepared by two monks at Grande Chartreuse. Other related alcoholic beverages are manufactured in the same distillery (e.g. Génépi). The exact recipes for all forms of Chartreuse remain trade secrets and are known at any given time only to the two monks who prepare the herbal mixture. Chartreuse is also used as an addition to other drinks.

Green Chartreuse, as well as it’s milder, yellow cousin, is expensive, at about $55 a bottle for the more concentrated and potent green, and just one dollar less expensive for the mellower yellow.

After a young mixologist, vis-à-vis a drink I can’t remember the name of, at Hawthorne, a cocktail bar on Commonwealth Ave, initiated me into the extraordinary, secret-recipe, 130-ingredient liqueur, I was immediately taken.

A flurry of Googling led me to deduce that the Chartreuse-centric cocktail The Last Word is, well, pretty much the last word in terms of how to enjoy Chartreuse.

The Last Word is a Gin based prohibition-era cocktail originally developed at the Detroit Athletic Club. While the drink eventually fell out of favor, it has recently enjoyed a renewed popularity after being rediscovered as a cult hit in the Seattle area by bartender Murray Stenson during his tenure at the Zig Zag Café

The Last Word consists of equal amounts of gin, green Chartreuse, maraschino liqueur and freshly pressed lime juice, which are combined in a shaker with ice. After shaking the mix is poured through a cocktail strainer (sieve) into the glass, so that the ready cocktail contains no ice and is served “straight up“.

The cocktail has pale greenish color being primarily due to the Chartreuse. Audrey Saunders of the Pegu Bar in New York City considers it as one of her bar’s best cocktails and describes its taste as follows:

I love the sharp, pungent drinks, and this has a good bite. It’s a great palate cleanser. And it’s perfectly balanced: A little sour, a little sweet, a little pungent.

The taste may also vary slightly depending on the brand of gin being used. The original cocktail at the Detroit Athletic Club during the prohibition era used bathtub gin and even today the club is using its own recreation of “prohibition era bathtub gin” (vodka, spices, herbs, citrus) for it. Some variations of the cocktail have sprung up, which usually replace the gin by another alcoholic drink and sometimes the limes for lemons. A particularly well known variation is The Final Ward created by the New York bartender Phil Ward, who replaced the gin by rye whiskey and the lime juice by lemon juice.

According to Ted Saucier the cocktail was created in the early 1920s in Detroit, where it was first served at the Detroit Athletic Club. Later Frank Fogarty introduced it to New York and in 1951 its recipe got published in Ted Saucier’s classic cocktail book Bottoms Up!.

Fogarty himself was no bartender but one of the best known vaudevillian monologists (roughly comparable to today’s stand-up comedians) of his time. Some assume that this occupation gave rise to the cocktail’s name. Nicknamed the “Dublin minstrel” Fogarty often opened his performance with a song and ended it with a serious heartthrob recitation. In 1912 he won the New York Morning Telegraph contest for the best vaudeville artist and in 1914 he was elected president of The White Rats (vaudeville actors union).

The cocktail however fell into oblivion sometime after World War II until it was rediscovered by Murray Stenson in 2004. Stenson was looking for a new cocktail for the Zig Zag Cafe in Seattle, when he came across an old 1952 copy of Saucier’s book. Soon after being offered in the Zig Zag Cafe it became somewhat of cult hit in the Seattle and Portland areas and spread to cocktail bars in major cities worldwide. It also spawned several variations with The Final Ward probably being the best known among them. In addition its recipe reappeared in newer cocktail guides including the 2009 edition of the Mr. Boston Official Bartender’s Guide.

You wouldn’t think that four, such very disparate, ingredients could combine to become greater than the sum of its parts, but — like earth, air, fire, and water, I suppose — the Last Word truly lives up to its name.

It’s a wonderful before-dinner cocktail, with a fuse that lingers.

My next libations mission: Benedictine.

This entry was posted in Libations. Bookmark the permalink.