Man, this sh*t is getting tiresome. 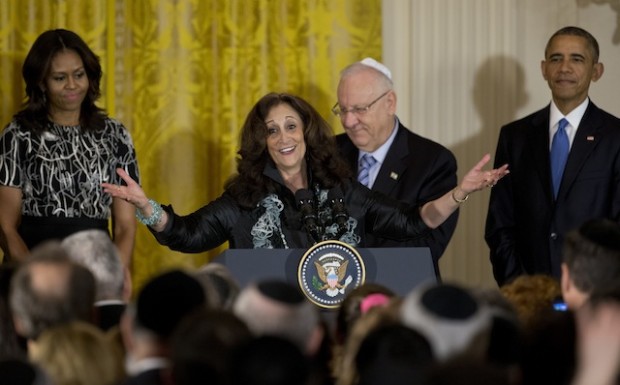 Following short speeches by President Barack Obama and Israeli President Reuven Rivlin, Talve opened her remarks by pushing for allowing in “all immigrants and refugees,” then added other social justice calls to action.

“I stand here today with my fierce family of clergy and Black Lives Matter activists who took to the streets of Ferguson to stand firm until all members of the community would see God in the face of the other,” Talve said.

“I stand here for two groups of St. Louis moms, one working to get guns off our streets and the other working to help clean up the fires of toxic nuclear waste that are threatening our lives in St. Louis and across the country,” the rabbi said.

“I stand here to light these lights to say no to the darkness of Islamophobia, and homophobia and transphobia and racism and anti-Semitism and all the other isms that dare to dim our hope,” she added.

This entry was posted in Democrat Party, Jewish, Left. Bookmark the permalink.