With the news of James Gandolfini’s passing (in Rome, Italy no less, as if to prove a point), it’s worth pointing out just how good The Sopranos was as a show, how well it holds up today, how influential it was in creating the whole gritty-cable-episodic-thing, and how in many ways it delivered a conservative message. 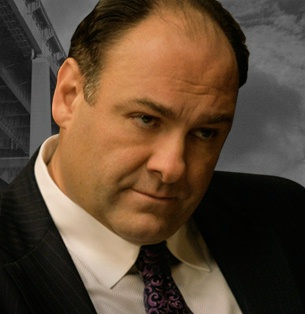 I discovered the show in its 3rd season and was quickly hooked. I then rented seasons one and two from Netflix and watched both in their entirety in about a week’s time. While the show peaked in its 3rd season, the subsequent seasons still held their own, especially when compared to anything else on TV at the time.

In both form and content, The Sopranos was largely the product of creator David Chase’s guiding vision. The effectiveness of the show’s straightforward narrative structure, extended serial format, skilled ensemble acting, and punctuation by the more visceral elements of post-1970s cinematic realism (e.g., its candid depictions of sex, violence, and profanity) combined with provocative storylines rich in substantive social commentary to create a pop-cultural phenomenon.

Part of The Sopranos‘ huge success was due to its functioning as an outlet for conservative sentiment. With respect to contemporary American social trends, the show compelled viewers to engage with moral and other philosophical positions of paleoconservatism. If we orient The Sopranos within the continually popular mob genre in film and television, as well as the wider traditions of classical tragedy and realist cinema, the show reflected a markedly conservative anxiety towards contemporary mass culture and the ensuing culture wars.

Modernity’s rupture with tradition was repeatedly referenced in The Sopranos as were what sociologist Daniel Bell referred to as the ‘cultural contradictions of capitalism’: inherited dictates of marital fidelity up against boundless libertinism; greed against restraint and honor; rootless anomie in the younger generations; pop-Freudian rationalizations of narcissism; the cults of victimization which emanate from identity politics; the excesses of political correctness; and the faux-determinisms characteristic of the modern ‘therapeutic society’. On several fronts, The Sopranos conveyed a markedly conservative response to the counter-cultural revolution of the 1960s and the unintended consequences of this cultural rupture.

A key dramatic device David Chase chose to pursue through the seasons of The Sopranos was the depiction of Tony Soprano’s family, both his nuclear family and his extended mafia ‘family’, as being torn asunder and undermined, so to speak, by forces outside his control. Such forces were not only physical in nature (e.g., power struggles within his own organization, competing mobsters and clans, the FBI in pursuit) but cultural in nature. We see one side of the culture wars acting to undermine the very value-infrastructure required for the mafioso (as well as a ‘traditional’ nuclear family) to survive.

Tony’s family was America’s family – the fractured nuclear family we have witnessed in the post-WWII period – and Tony’s fragile empire was an allegory for American society itself. As Chase was acutely attuned to, the ‘transvaluation of values’ which took place as the philosophies of the counter-culture became the mainstream battered many elements of tradition, including those elements which had previously supported the extended kinship framework of mafioso.

This change in normative values since the ‘60s has seen a decisive shift towards the ‘self’ as sole arbiter of lifestyle (‘if-it-feels-good-do-it’ self-expressivism), the proliferation of rights-based notions of entitlement (with, it is argued, a deficiency of balancing notions of personal responsibility and duty), relativist assumptions that ethics and law are supervenient, identity politics and the culture of victimization, conceptions of what is good and desirable dictated by narrow utilitarian arguments predicated solely upon materialism, corresponding expectations demanded of the welfare state model, and the breakdown of the nuclear family. As conservative voices from Burke to Eliot to Kimball have argued, the troubling social ramifications of modernity’s growing ‘hyper-individualism’ — the radical unsettling of traditions and their institutions — are seen as the direct consequences of flawed philosophical assumptions about human nature (the conservative conception of human nature, in contrast, being of the fallibility and imperfectability of man), social organization, and the nature of moral inquiry.

Southern Italy’s role in the cultural and historical roots of mafioso are relevant to an contextualizing analysis of The Sopranos. That ethics and law are not supervenient was a defining historical experience in southern Italy, a historically subjugated region in which the mafia was born and from where the vast majority of Italian-American immigrants came from. As an extra-governmental mode of justice in a region where sanctioned government was often distrusted or perceived as too distant and unfair, the mafia’s emphasis on family and kinship, and corresponding norms of reciprocity, became an adaptive social mechanism. Exported to America with the first generations of Italian immigrants, the social mores and traditions appropriated from southern Italy (e.g., honor, virtue, sobriety) and those of the mafia (e.g., loyalty, omerta) are under continuous assault in The Sopranos, and on display in the show is the irony of the mafia’s historical dependence upon a now-disappearing sense of ethnic identity, as each generation of Italian-Americans more fully assimilates into mainstream American culture. In this regard, Tony’s tribulations are analogous to the dillema American society as a whole faces today: are elements of tradition necessary for the development of a morally ‘healthy’ society, and if so, which traditions? To what degree can adequate, reliable, and long-term moral frameworks survive encroaching relativist, collectivist, and egalitarian cultural forces of the modern age?

In many ways, The Sopranos served as an embodiment of an Aristotelian approach to ethics. Major strands of conservative scholarship have built upon an Aristotelian emphasis on moral character, a ‘virtue ethics’ approach, with normative ethics construed as virtuous behavior adjudicated by practical reason and necessarily enmeshed in social modes of tradition. This philosophical template brings to light important contrasts between notions of ethics, justice, duty, and the law as they existed in Greco-Roman antiquity (and in some regions and cultural niches today) versus the increasingly formalized and rationalized ethical and legal systems of modernity. The authorial voice of The Sopranos sympathizes with such ‘virtue ethics’ approaches, but leaves as an open question the ultimate outcome of the culture wars as experienced through Tony Soprano.

With respect to aesthetics as a philosophical domain, the complex view of human nature and practical reason found in secular conservative philosophy can be constructively illustrated and enlivened by the narrative arts such as literature and film, arts that are able to provide nuanced depictions of embodied reason (as opposed to overtly utilitarian or libertarian ethical frameworks hindered by their over-reliance upon abstract reason) vis-à-vis compelling, phenomenological portraits and ethically-complicated scenarios for the viewer to engage with. In short, aesthetics impacts ethics.

With The Sopranos, rich characterization, multiple narrative devices (e.g., straightforward plot continuity, suspense, dream sequences, flashbacks, etc.), and the show’s extended serial format afforded a detailed and intimate knowledge of the personalities, values, and even psyches of its characters. Emerging from this cacaphony of voices and characters was a distinctively conservative perspective on America’s culture wars.

And, within this fictional world of mobters who also face the everyday tribulations of modern life, no voice was more important that Tony Soprano’s.

This entry was posted in Culture, Culture Wars, TV. Bookmark the permalink.