Jon Baskin has a nice essay on philosophy in True Detective. After reviewing some of the snooty dismissals of the show’s philosophical engagements, Baskin defends the show’s overt philosophizing:

Although True Detective has sometimes been criticized for failing to offer a robust counter-argument to Rust’s skepticism (“That’s above my pay grade” says one of the detectives in response to the flat circle speech), the truth is that not even professional philosophy has offered convincing responses to it. Contra the exertions of a Descartes or a Kant, it remains open to the modern (that is, secular) skeptic to say, as Rust does to Hart at one point, that the only difference between himself and those who find meaning in family, love, individuality, or spirituality is “denial.”

At the same time, looking forward to the last episode, I wonder if the true counter to the skeptic’s philosophy has been coming this whole time from Rust himself. When Hart asks Rust in Episode 3 why, if he believes what he believes, he hasn’t killed himself, he answers that he doesn’t have the constitution. But Rust, despite his skepticism, seems to value something that goes by the name of “commitment.” Hence the black comedy of his congratulation to Hart after he shoots a defenseless Ledoux in the head: “It’s nice to see you commit to something.” His obsession with commitment is actually what distinguishes Cohle from the other characters on True Detective. The rest of the police officers, for instance, are just doing their jobs; Rust is committed to his (he does not “let go” of the case at hand whether he receives a paycheck and a desk at the precinct office or not)…

Philosophically speaking, I have long vacillated between two polar oppositional conceptions of consciousness as a phenomenon. On the one hand is the powerful, ‘New Mysterian’ argument of the ultimate unknowability of consciousness: qualia is irreducible and impervious to a 100% naturalistic explanation.

On the other hand is the equally convincing, hyper-materialist thesis wherein consciousness, the ‘parent of all horrors’, is a cosmic joke, a bum deal that is nothing more than epiphenomenalism, an illusory loop of narrative logic which assigns itself an importance and validity which it does not, ontologically, possess. Such is the nihilism of Cohle.

With this in mind, Baskin is correct to orient Nic Pizzolatto’s writing as engaging in a dialectic on this philosophical issue, with the character of Cohle representing the philosophical tension between these two, equally tenable positions. From kernels within Cohle’s monologues, to asides in other dialogue, to various visual cues, Cohle’s nihilism is tempered by an alternative ‘leap of faith’ towards… the opposite of nihilism. 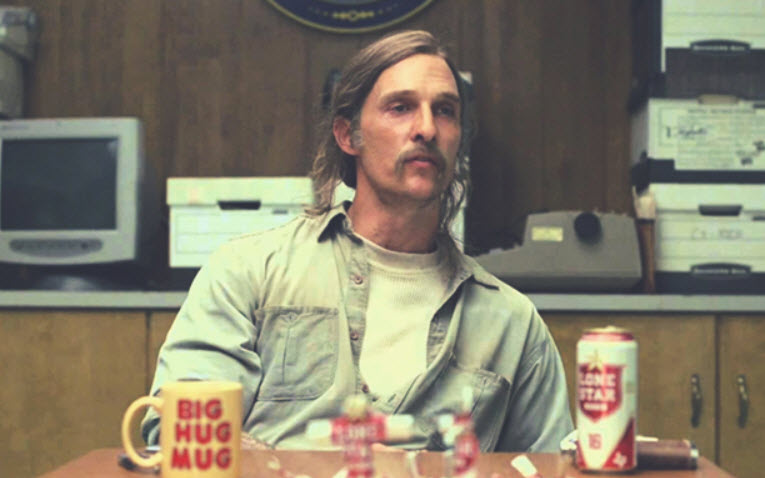 This entry was posted in Existentialism, TV. Bookmark the permalink.