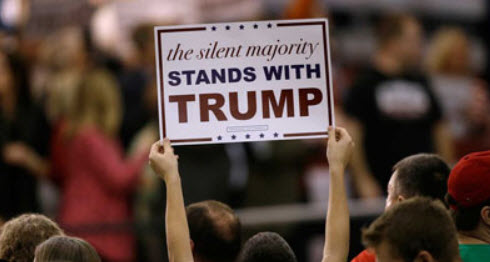 In recent months, I’ve been playing out in my head what the ‘Trump Revolution’ will look like… after Trump. Is it sustainable? Has it unleashed long-suppressed sentiments among whites, particularly working class whites? Has Trump finally popped the balloon of political correctness which stifles so much discussion at the national political level? Is that balloon easily re-inflatable?

After citing the Goldwater-Rockefeller GOP civil war in 1964, George Wallace’s third-party run in ’68, and other similar political insurgencies (but, oddly, not Buchanan or Perot, the two most trenchant episodes of recent decades), Ross Douthat, a token NYT cuckservative, weighs in (“Trumpism After Trump“):

Would a Trump-induced schism have a similarly transformative effect? In certain ways the ingredients are there. Trump has laid bare real divisions in the party, particularly the wide divide between many working class Republicans and the G.O.P.’s agenda-setting elite. If you squint a little, his movement looks ideologically coherent, and it could have staying power as a kind of American analogue to Europe’s further-right parties: ethno-nationalist, protectionist, anti-immigration and anti-Islam, but more statist and secular than the current G.O.P.

Douthat thinks that that one must “squint a little” to see the sociological, cultureal, and political viability of the phenomenon Sam Francis wrote about 20 years ago.

But when you try to imagine how this schism might play out in the long run, you run into two distinct realities.

First, there is no Trump movement as yet; there is only Trump himself, his brand and his cult of personality, plus a parade of opportunists and hangers-on. This makes the Trump phenomenon very different from the Goldwater and McGovern candidacies, which were boosted by pre-existing movements on the right and left. It also makes it different from more recent insurgencies, the anti-war left and the Tea Party, which were built more on grassroots mobilization and donor networks than on a single standard bearer.

To this I would say: Douthat is perhaps underestimating the organic implicit whiteness of the Tea Party movement.

Maybe a Trump movement is struggling toward self-consciousness, and in four to eight years it will be fully formed. But for now there aren’t Trump-like candidates challenging Republican politicians insufficiently committed to his cause (this has been a pretty easy year for incumbents, in fact), nor is there a Trumpish version of the netroots poised to be a player in Republican politics in 2018 or 2020. (The closest thing to a Trumpist activist cohort is the so-called “alt-right,” a mix of Jacobite enthusiasm and noxious racism that’s still mostly a Twitter and comment-thread phenomenon.)

It goes without saying that Douthat, like all of GOPE, either minimizes or has complete disdain for, the Alt-Right, which he unfortunately defines too narrowly to be of the Mencius variety.I would gather the GOPE greatly underestimates the extent of a more widely-defined, body of Alt-Right sentiments out there in White America. That Trump tapped into this deepening reservoir of Silent Majority-ism is notable and, even if he loses the nomination or POTUS, one for the history books.

A few prominent Trumpistas do make a neat ideological fit with Trumpism as it might exist going forward — border hawks like Jeff Sessions and Jan Brewer, resentful populists like Sarah Palin, media bomb-throwers like Ann Coulter and the remaining Breitbart crew. But mostly he’s surrounded by has-been politicians looking for a second life, media personalities looking for an audience, and grifters looking to cash in (but I repeat myself).

Well, alrighty then. Tell us what you really think, Ross!

Maybe these ‘has-been politicians looking for a second life’ are only now seeing their Moment, that is, they’re only now seeing widespread reception to the prophecies of Sam Francis, Jared Taylor, and other leading ‘Alt Right’ figures. Admittedly, others, like Newt, emanate a degree of opportunism.

So when Trump is no longer a candidate for president, Sean Hannity will probably morph back into a partisan hatchet man, Ben Carson will go back to his speaking circuit, Newt Gingrich will find some new ideological coat to wear and Chris Christie will take a job chauffeuring Trump’s limo. Maybe they’ll all rally again if he runs again in 2020. But Trumpism will need new leaders and a real activist base if it’s going to be more than a tendency or a temptation going forward.

That last sentence is the crux, and what I have been trying to forecast out over the next few years.

Where does Trumpism go? In the slim chance he wins POTUS, Trumpism has legs for 4 years, but realistically has only his first two years to really ‘get things done’.

If he loses POTUS (or gets the nomination stolen from him), what do Trump supporters do next? Who do they go to in regional elections, in midterms?

Then second, even if Trumpism finds the leadership and foot soldiers to fight a longer civil war, it’s very hard to see a classic realignment following. That’s because it’s hard to imagine either Republican faction — the Trumpist populist nationalists or the movement conservatives who currently oppose him — swinging into the Democratic coalition the way George Wallace’s voters eventually joined the G.O.P. and Rockefeller Republicans joined the Democrats.

That, of course, remains the open question.

Will GOP, Inc. change its standard platform template to be more like Trumpism? (Not likely)

Will GOP, Inc’s resistance to such changes further incentivize some new nationalist Third Party, as is being seen across Europe?

Furthermore, where will the Bernie Boys turn to once his campaign ends?

The opportunities to tap into white anxieties surrounding immigration, trade, and the evils of Political Correctness are there for the taking.

Who will step up to the plate?

This entry was posted in Alt-Right, Republican Party, Third Party. Bookmark the permalink.