This blogger does some interesting number crunching on data from the National UFO Reporting Center (NUFORC), such as this chart representation of worldwide UFO sightings per 10 million people: 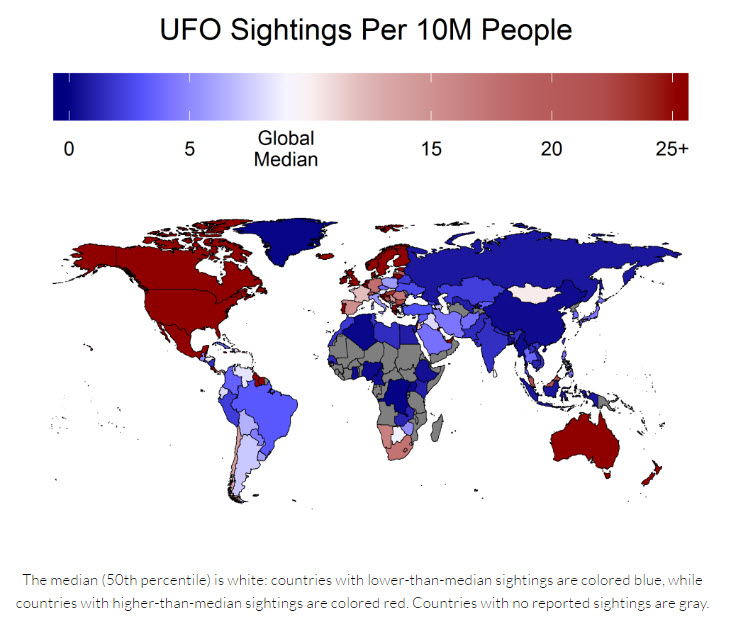 Notice how the reddest areas are where the world’s “white” people live (i.e., North America, Western Europe, Australia, and New Zealand.) Why might this be? Could it be because — in an era where whites are made to feel awful about themselves and the root cause of most of humanity’s ills, and with Diversity™ deracinating former white strongholds – these whites seek transcendence in one form or another? They seek it through religion, UFOs, or, all too often, heroin. Some of them seek it through white identitarian politics.

There’s also this chart limited to sightings in the U.S.: 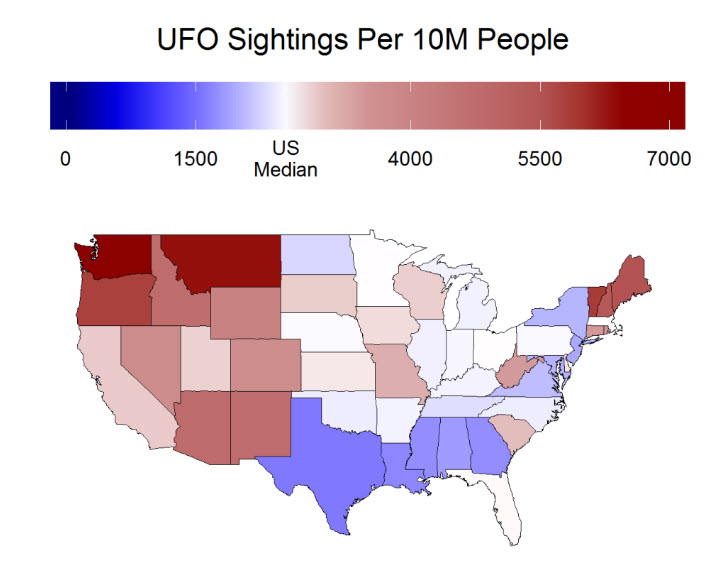 Notice how UFO sightings are weakest in the Bible belt and the Rust Belt. I’m not sure if my half-cocked theory pans out or not, but I’m reminded of the work of Rodney Stark & William Sims Bainbridge, two eminent sociologists of religion.

Years ago (I can’t remember in which book), Stark and Bainbridge had a map which showed that, in the U.S., where per capita churchgoing was high, belief in paranormal things (e.g., cults, UFOs, Bigfoot, New Age philosophy, etc.) was relatively low. And vice versa. This, they believe, suggests a functionalism to the dynamics of religion.

For example, here is the abstract from Bainbridge’s 2004 article “After the New Age”:

This article explores the connections between conventional religion and the New Age, using data from a major online questionnaire study, Survey2001, that was sponsored by the National Geographic Society and the National Science Foundation. It begins with two competing hypotheses. (1) Involvement in conventional religion discourages involvement in unconventional para-religion because conventional religion competes with para-religion. (2) Conventional religion encourages unconventional para-religion by promulgating supernatural assumptions about the nature of humanity and the universe. Factor analysis of 20 putatively New Age agree-disagree questionnaire items reveals that 15 of them define a general New Age factor, supported by secondary anti-paranormal and anti-alien factors. Three measures of conventional religiousness show complex relations to the New Age items. Analysis using factor scores indicates that both hypotheses express real effects that cancel each other out for many people. Individual subjective religiousness and personal prayer or meditation correlate strongly positively with the New Age among respondents who never attend religious services. The study considers denominational differences, then concludes by showing that a curvilinear relationship exists between religiousness and acceptance of New Age beliefs.

The Western world is undergoing a profound identity crisis, one that is reaching an apex.

So many things seem to be in play.

This entry was posted in Culture, International, National, Sociology. Bookmark the permalink.