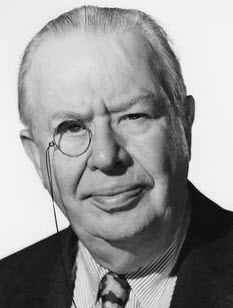 I recently watched three excellent movies with the extremely funny character actor Charles Coburn: The More the Merrier (1943), for which Coburn received the Best Supporting Actor Oscar; Howard Hawks’ funny Gentlemen Prefer Blondes (1953), where Coburn plays a South African diamond magnate whom a stunning gold-digger (Marilyn Monroe in her physical prime) becomes enamored with; and a truly wonderful performance in the comedy-drama The Green Years (1946), where Coburn plays an elderly, warm-hearted, yarn-spinning, whisky-drinking, Scottish grandfather who becomes a mentor to the orphaned protagonist.

In each of the films, Coburn transforms himself through different accents and overall demeanors. In The Green Years, his comic timing is impeccable.

From Coburn’s Wikipedia page, I was also pleased to learn:

Coburn served as vice-president of the Motion Picture Alliance for the Preservation of American Ideals, a group opposed to leftist infiltration and proselytization in Hollywood during the Cold War. Coburn was a member of the White Citizens’ Councils, a group which opposed racial integration.

And, in our P.C. age of today, this was refreshing:

According to Piper Laurie in her memoirs (Learning To Love Out Loud), Charles Coburn loved pinching women’s bottoms. It was for him like a tic. Every female under one hundred and five had to move fast around. But no one ever considered reporting from sexual harassment.

Coburn was one of the unsung heros of The Golden Age of Hollywood.