I only recently discovered this ‘70s punk band, very much of the Oi! tradition, a musical and cultural tradition borne of white, British, working class ennui mixed with pub rock structures and pure, early-punk ferocity and immediacy. From one page:

Cock Sparrer (Cock Sparra/Cock Sparrow) formed in 1974 as a pre punk pub band they acquired and retained a largely skinhead following as they sped up like so many other bands at the time, with the onset of punk. An aggressive sounding band in the Small Faces / Slade tradition. East End boys singing about tough times and football violence in cockney accents. 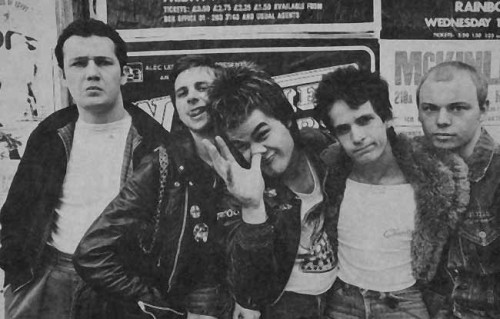 They’re still out there, keeping the faith alive. And — it figures — they just played two shows in NYC earlier this month (their only two U.S. appearances), 15 years after their last U.S. appearance, and a mere week before I discovered them. (Some great photos of the shows here.)

Shock Troops has a slew of other great songs. I highly recommend you stream the whole album:

Why haven’t I heard of these guys before?

This entry was posted in Music, White Identity. Bookmark the permalink.