They don’t call it the Jew York Times for ‘nothin. Here is the front page of nyt.com right now: 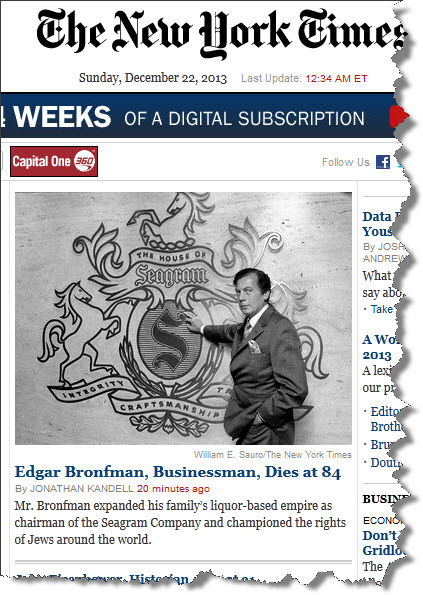 … and they currently have an op-ed online titled “My Half-Jewish Child Wants Christmas. I Don’t, Anymore.” By Francesca Kaplan Grossman.

She’s Jewish, she announces in the first sentence, before bemoaning how, beginning the day after Thanksgiving, she’s never really felt all that comfortable around Christmas.

As a kid, Francesca and her sister would beg their parents for a Christmas tree, and, perhaps contributing to her Christmas alienation, “every year, my parents refused, citing our Jewish roots, end of story, that’s it, that’s all.”

One of the most intriguing memes I’ve ‘discovered’ in recent years is how, on the one hand, Jews will simultaneously argue that Jewish identity is a religious concept only, and absolutely not a racial category, but will then argue that one can still be ‘Jewish’ yet not be religious. Huh?

That’s because, as Francesca argues, being Jewish is ‘cultural’:

Now, we were not a particularly religious family. On the contrary, actually. But we were very Jewish. I have had fight upon fight with friends about how this is possible. What I have determined is that we, as a people, need another word for being “culturally” Jewish. We have our own food, our own traditional ceremonies, our own dances, our own music, and definitely our own diseases (ask any Jewish woman you know about being tested for genetic issues before she had a baby). Some of it is tied to our religion, but frankly, most of it is not.

So… in a paragraph in which she argues that being Jewish is ‘cultural’, she mentions genetic issues unique to Ashkenazi Jews.

As Kevin Macdonald addresses in Separatism and its Discontents, there’s very good evidence that the universalizing ideology of Christianity evolved as a form of group identity in opposition to the non-universalizing, highly separatist, highly endogamous Judaism of the Byzantine era.

With this in mind, Francesca continues:

I would venture to say that part of what defines us as culturally Jewish in this country is that we are not mainstream Christian. The absence of wreaths is more telling than the presence of menorahs.

(By the way, I find a bit depressing that we’ve had to exaggerate a relatively trivial holiday just so that people don’t feel too bad for our children around the holidays. What it has become is a chance for us Jewish parents to ease the guilt of not conforming to the American Christmas culture. In some ways, that’s lovely. In other ways, it’s sort of sad.)

Now, Francesca has married a non-practicing Christian, who celebrated Christmas his whole life, and they’ve popped out a couple of kids.

And Francesca doesn’t want the family to celebrate Christmas.

So then we had a child. And then we had another one. And you’d think that I’d be beside myself with glee, because it gives me the go-ahead to sprinkle tinsel and smell up the house with piney loveliness. Of course, this is a pretty common dilemma, but it was one I never anticipated having to deal with. I always figured I would embrace Christmas wholeheartedly as an adult, considering my intense youthful yearning. But I haven’t. I haven’t sprinkled any tinsel. I have never bought a tree. Instead, I am terrified.

Just yesterday, as I was helping him brush his tiny teeth, my 4-year-old son turned to me and said, “Can we just pretend to have Christmas?”

Ooh, good one – I should have thought of that!

Other people have asked me similar questions:

“Come on, it’s an American Holiday at this point, it’s not religious, can’t you just deal?”

“Can’t you just participate at home? It’s so fun, sparkly decorations – your favorite!”

What I try to explain is that I respect the holiday. I really do love it. I love to visit it, I embrace the people I love who celebrate it. But it isn’t my holiday. There’s nothing that will change that. It’s not, as Jon Stewart tells us, “A War on Christmas.” It’s just not my thing.

He pouted, but he got over it quickly. This time. But I eagerly await the day that both my little ones look at me the way my sister and I used to look at my parents with longing, disappointment and confusion. But it’ll be worse, because I’m only one Jew, not a pair, like my parents were. I am terrified because I don’t want to want Christmas, anymore. I have learned why it is important that I don’t have a Christmas tree. It took me more than 30 years to really get it. That being able to live with out it – because of, not in spite of, who I actually am, is really the important part.

She concludes the piece with the fact that she has effectively won (they are raising their kids ‘Jewish’), finishing with a flip Solomonic notion:

I need some help figuring out how to explain this to these curious little people I love so much. Regardless of how much I reorganize it in my head, they will always be half Jewish. In the end, it isn’t really about me anymore, even if we have agreed to raise them in a Jewish home.

Should I get them half a tree?

This entry was posted in Christianity, Jewish. Bookmark the permalink.