SPOILER ALERT: If you intend to watch the show, but haven’t yet, don’t read the rest of this post.

I found the finale a bit disappointing, albeit, given the norms of the procedural TV genre and what might otherwise have been penned, reasonably satisfying. (Linda Holmes’ review of the whole series is, for the most part, on the mark.) Perhaps it is the intent of show’s talented creator Nic Pizzolatto to resolve the Yellow King matter in future episodes? Perhaps wider elements of the conspiracy (“We didn’t get em all, Marty”), as well as a yet-unrevealed incarnation of the Yellow King will emerge, but through different characters? Or maybe none of the above?

Of the ‘weird fiction’ allusions in the show, and how it may have steered audiences askew in their expectations, Pizzolatto notes in a recent, post-finale interview:

There’s never been anything I didn’t love that I didn’t connect with on a personal level because to some degree, I projected upon it. That said, I think I’ve made clear that my only interest in the Chambers stuff (Robert W. Chambers wrote “The King in Yellow”) is as a story that has a place in American myth. And it’s a story about a story that drives people into madness. That was mainly it. Beyond that, I’m interested in the atmosphere of cosmic horror, but that’s about all I have to say about weird fiction. I did feel the perception was tilted more towards weird fiction than perhaps it should have been. For instance, if someone needs a book to read along with season 1 of “True Detective,” I would recommend the King James Old Testament. I wouldn’t tell anyone to go buy Robert Chambers. It’s not that great a book. Joseph Conrad and William Faulkner I think are in there far more than Chambers or Lovecraft. But again, I guess I hope that these 8 chapters, once the totality of it is evident, it might provoke a re-evaluation.

All of the above being said, the show is phenomenal. Matthew McConaughey is absolutely mesmerizing as Rust Cohle, and Woody Harrelson is perfectly cast as the more ‘straight man’ partner Marty Hart. 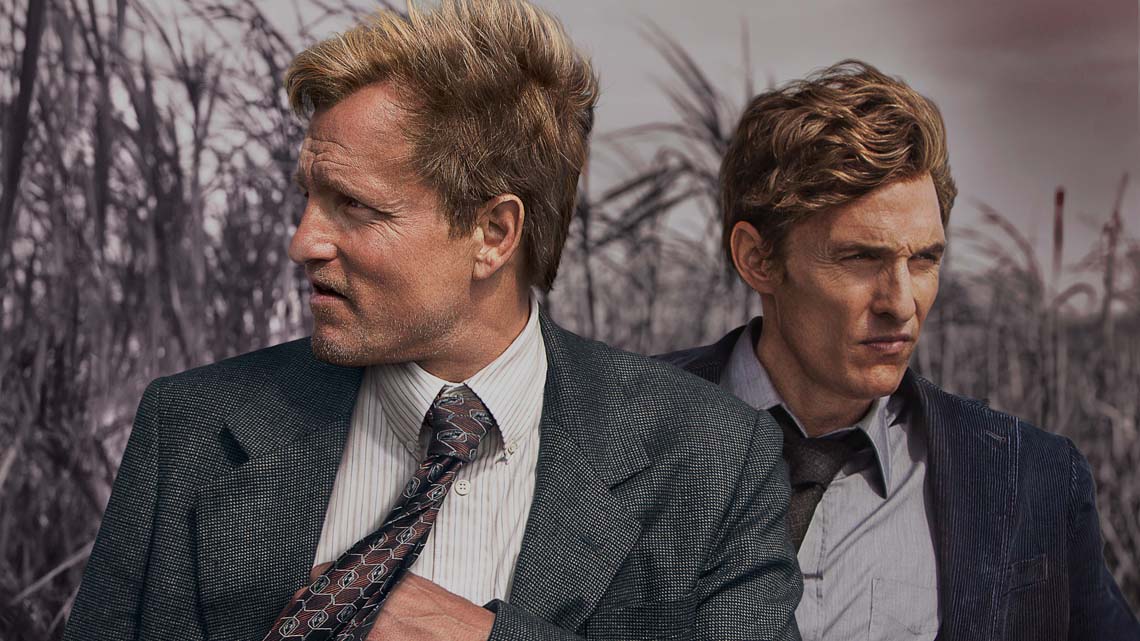 In the final episode, the conversation between Cohle and Marty about the stars, light, and darkness reminded me of the epilogue to Cormac McCarthy’s Blood Meridian, the latter author being someone who mines much of the same philosophical concerns as those broached in True Detective.

In my opinion, and given my own philosophical leanings, the show is spellbinding due to its skillful combination of great writing (wonderfully acted), skilled directing (shot on real film), and Cohle’s philosophical expositions

In a WSJ interview, creator Nic Pizzolatto cites some of his literary influences in making True Detective:

I’d suggest Lovecraft or Poe, but everybody knows them already. More recently, I’d point people in the direction of Thomas Ligotti, Laird Barron, John Langan, Simon Strantzas and others. For fans of the show who’d like to see what contemporary voices have done with Chambers’ “King in Yellow,” I’d point them toward Karl Edward Wagner’s short story “The River of Night’s Dreaming” or the recent anthology “A Season in Carcosa.”

Pizzolatto then cites the overt, existentialist, anti-natalist, and nihilist influences become embedded in Cohle’s philosophical worldview, particularly the writings of Thomas Ligotti:

I first heard of Ligotti maybe six years ago, when Laird Barron’s first collection alerted me to this whole world of new weird fiction that I hadn’t known existed. I started looking around for the best contemporary stuff to read, and in any discussion of that kind, the name “Ligotti” comes up first. I couldn’t find any of his books in print, and their used prices were prohibitive for me at the time. But I located a couple at libraries, and his nightmare lyricism was enthralling and visionary.

I read “The Conspiracy Against the Human Race” and found it incredibly powerful writing. For me as a reader, it was less impactful as philosophy than as one writer’s ultimate confessional: an absolute horror story, where the self is the monster. In episode one [of “True Detective”] there are two lines in particular (and it would have been nothing to re-word them) that were specifically phrased in such a way as to signal Ligotti admirers. Which, of course, you got.

The philosophy Cohle promotes in the show’s earliest episodes is a kind of anti-natalist nihilism, and in that regard all cats should be unbagged: “Confessions of an Antinatalist,” “Nihil Unbound,” “In the Dust of this Planet,” “Better to Have Never Been,” and lots of Cioran were all on the reading list. This is before I came out to Hollywood, but I knew that in my next work I would have a detective who was (or thought he was) a nihilist. I’d already been reading E.M. Cioran for years and consider him one of my all-time favorite and, oddly, most nourishing writers. As an aphorist, Cioran has no rivals other than perhaps Nietzsche, and many of his philosophies are echoed by Ligotti. But Ligotti is far more disturbing than Cioran, who is actually very funny. In exploring these philosophies, nobody I’ve read has expressed the idea of humanity as aberration more powerfully than Cioran and Ligotti.

Vulture has a nice piece entitled “Ask a Philosopher: What’s Up With True Detective’s Rust Cohle?“, where they interview author Paul J. Ennis, who has a Ph.D. in philosophy from University College Dublin. Ennis notes:

Rust has a willingness to speak openly about ideas common to us all, but ones we are usually expected to suppress…

For example, Ligotti buys the arguments of some contemporary neuroscientists, which Rust would surely be familiar with, that there is no self and there is no free will. I see this strain throughout his monologues that life is a trap, a dream, or a program. Once you grasp that, and truly believe it, then you cannot help but see the self as akin to being trapped in a kind of nightmarish loop. In many ways, the self is the micro-scale of this nightmare and time is the macro-scale that he also touches on in terms of a ceaseless loop. There are some tensions between these positions, but common to both is the idea that we are puppets at the mercy of wider forces…

…I’d say philosophically Rust considers consciousness an aberration or evolutionary error/mistake, that he is not concerned with filtering knowledge according to “the pathetic twinge of human self-esteem” [to quote philosopher Ray Brassier], and that, as an anti-natalist, he subscribes to the old maxim of “better to have never been born.”…

Of Cohle’s still lingering idea of hope, however faintly its lights may be seen:

I’ve not seen it clearly yet, but there are signs of empathy in Rust that is not entirely alien to the nihilistic worldview, given the centrality of suffering, nihilism is pretty empathetic. I would say he is passionate and sensitive to those he sees as being crushed by various forms of power, which is often sustained by moral hypocrisy. I wouldn’t say hopefulness is quite the right word, but I would say a nihilist could find drive, if not meaning, from undermining those with power. We see this in his barely concealed contempt for Reverend Tuttle (and his intuition that he is a moral hypocrite) and his sympathy for the more honest and flawed former Rev. Theriot.

This is a story that began with its ending in mind, that Cohle would be articulating, without sentimentality or illusion, an actual kind of optimism. That line, “you ask me, the light’s winning”, that was one of the key pieces of dialogue that existed at the very beginning of the series’ conception. For me as a storyteller, I want to follow the characters and the story through what they organically demand. And it would have been the easiest thing in the world to kill one or both of these guys. I even had an idea where something more mysterious happened to them, where they vanished into the unknown and Gilbough and Papania had to clean up the mess and nobody knows what happens to them. Or it could have gone full blown supernatural. But I think both of those things would have been easy, and they would have denied the sort of realist questions the show had been asking all along. To retreat to the supernatural, or to take the easy dramatic route of killing a character in order to achieve an emotional response from the audience, I thought would have been a disservice to the story. What was more interesting to me is that both these men are left in a place of deliverance, a place where even Cohle might be able to acknowledge the possibility of grace in the world. Because one way both men were alike in their failures was that neither man could admit the possibility of grace. I don’t mean that in a religious sense. Where we leave Cohle, this man hasn’t made a 180 change or anything like that. He’s moved maybe 5 degrees on the meter, but the optimistic metaphor he makes at the end, it’s not sentimental; it’s purely based on physics. Considering what these characters had been through, it seemed hard to me to work out a way where they both live and they both exit the show to live better lives beyond the boundaries of these eight episodes. Now they are going to go on and live forever beyond the margins of the show, and our sense, at least, is they haven’t changed in any black to white way, but there is a sense that they have been delivered from the heart of darkness. They did not avert their eyes, whatever their failings as men. And that when they exit, they are in a different place.

So, in the end, considered several different routes the show could have taken, and terms of ‘meting out’ philosophical seriousness, perhaps wisely pursued the most realist, least fantastical, route.

In this same interview, Pizzolatto (seriously? playfully?) teases us about Season 02:

I don’t know where you are in working on season 2, but has any of the reaction to this season informed what you’re doing with the next?

Nic Pizzolatto: It’s informed exactly one thing. It’s that I realize I need to keep being strange. Don’t play the next one straight.

Can you tell me anything at all about season 2?

Nic Pizzolatto: Okay. This is really early, but I’ll tell you (it’s about) hard women, bad men and the secret occult history of the United States transportation system.

This entry was posted in Existentialism, Philosophy, TV. Bookmark the permalink.