States People Want To Move Out Of

From a recent Gallup poll: 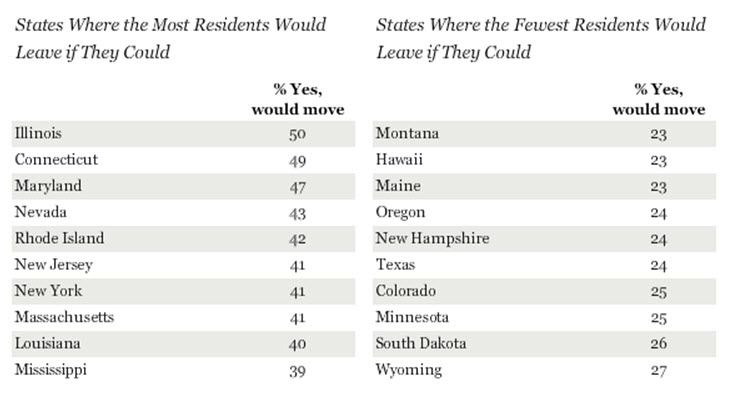 Gallup sums things up, by speculating in terms of Red vs. Blue (or, as I would further propose, between white and non-white):

State leaders have important reasons for wanting to see their state populations grow rather than shrink. A growing population usually means more commerce, more economic vitality, and a bigger tax base to pay for state services. A shrinking population not only hurts government coffers, but can weaken a state politically by virtue of the potential loss of U.S. House members through redistricting every 10 years.

Nevada, Illinois, Maryland, Louisiana, Mississippi, New York, and Connecticut all appear particularly vulnerable to losing population in the coming few years: high percentages of their residents say they would leave if they could, and larger-than-average percentages say they are at least somewhat likely to do so in the coming year. At the other end of the spectrum, Texas, Minnesota, and Maine have little to fear. Residents of these states are among the least likely to want to leave and few are planning to leave in the next 12 months.

If these states sound familiar to readers of Gallup’s previous 50-state poll articles, it’s because several of them also appear at the top or bottom of the states for resident satisfaction with state taxes, state government, and overall perceptions of how their state compares to others as a place to live. Texas is in the top 10 on all three, while Illinois, Rhode Island, and Maryland rank in the bottom 10 on all three.

One thing we can expect in the future = The abovementioned dynamic re. redistricting threats to Blue states (when inevitably actualized) will lead to a greater Democrat/MSM chorus for an end to the electoral college, for pure national majoritarianism (i.e., mob rule), and the like.

It will be similar to how, the more HBD theses are borne by empirical evidence, the evermore vigilant the Left will be in screaming racism.

This entry was posted in National, Secession. Bookmark the permalink.