So, it’s Republicans (increasingly, the party of implicit whiteness) not wanting to spend even more money on ‘the poor’ (in a city that has been totally controlled by Democrats since 1967) that The Organizer cites as a cause of the rioting and looting.

The meaning of Baltimore isn’t thugs without father figures and other pathological subcultural factors (built up since the wonderful social experiments of the mid-1960s), but is rather time for the whole nation to undergo a “soul searching.”

Glad he cleared that up.

Meanwhile, Hillary brings pandering to a new low, while simultaneously a) staying ahead of the ‘old lady’ label, and b) trying to change the election narrative to ‘first woman POTUS’: 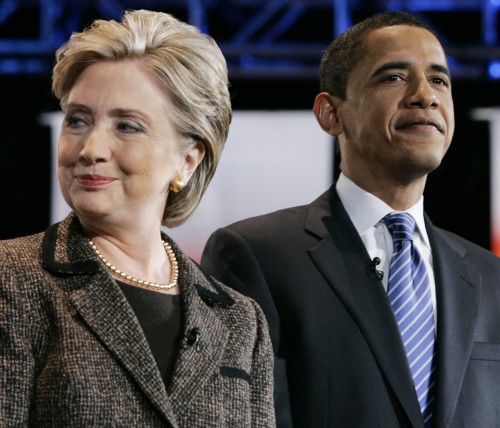 “Not only as a mother and grandmother, but as a citizen, as a human being, my heart breaks for these young men and their families,” Clinton said. “We have to come to terms with some hard truths about race and justice in America.”

I read the other day that Hillary is expected to spend something like $2.5 billion on her POTUS campaign, a figure that is double the previous record for a POTUS campaign.

With cash like that to target ads for various jellyfish demos + the short term memory of pop culture + the said jellyfish’ love of Bubba + the inevitable prepping we can expect TV/Hollywood to put into heavy gear about the need for a female POTUS + the likelihood of a GOP, Inc RINO as her opponent… I’m sorta resigning myself to the fact that she’ll probably be our next POTUS.

This entry was posted in Black, Democrat Party, National. Bookmark the permalink.