The Thorough Destruction of a Symbol

And so it begins…

ATLANTA — Calls to remove Confederate imagery from public places multiplied rapidly across the South and beyond Tuesday, with opponents eyeing state flags, license plates and statues of Civil War politicians and generals.

We also have: “Walmart, Sears, eBay to stop selling Confederate flag gear“. The article mentions Amazon’s silence on the matter to date, with this telling paragraph:

Sales of three versions of the flag were up 1,670% to 2,305% over a period of 24 hours, according to Amazon data. One of those flags, priced at $1.80 plus shipping, is currently the ninth best-selling item in the Patio, Lawn & Garden department and the top-selling item among all outdoor flags and banners sold on Amazon.

Oops, so much for that hesitation. From a few hours ago we have: “Amazon to Remove Confederate Flag Items, Following Wal-Mart and Others“.

Newly emboldened college libs are getting in on the action:

AUSTIN — Hundreds of University of Texas students have signed a petition calling for the university to remove a statue of Jefferson Davis.

Davis was the President of the Confederate States of America during the Civil War and students say his support of the institution of slavery and white supremacy do not reflect the values of the university.

For decades, it has sat at the foot of the iconic UT tower facing the south.

On and on it goes… Where it stops, nobody knows.

Florissant, Missouri (CNN) – Hillary Clinton commended the groundswell in anti-Confederate flag sentiment at an event in Missouri on Tuesday, calling the battle flag “a symbol of our nation’s racist past.”

Across the country, statues memorializing Confederate dead have been mocked and defaced as pressure mounts to remove what many view as enduring symbols of white supremacy.

Here’s but one of the many Confederate monuments vandalized recently, this one in Charleston, U.S.A: 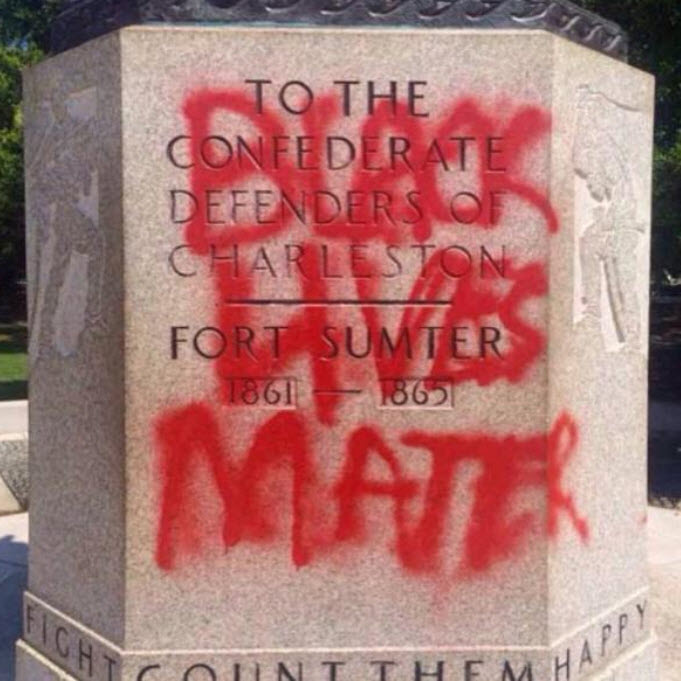 This entry was posted in Cultural Marxism, White Identity. Bookmark the permalink.